The value in attending another lecture 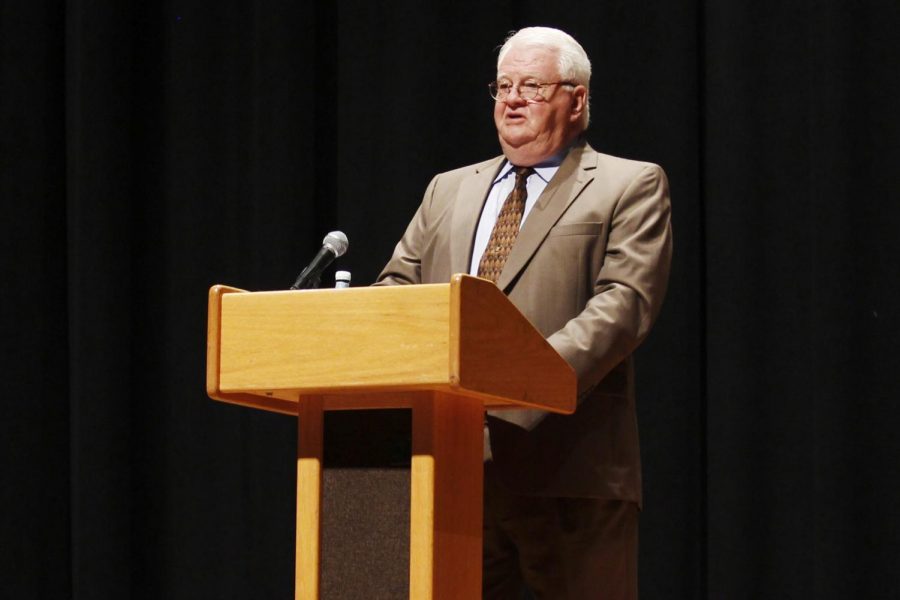 The “Then and Now” lecture series began with the Constitution Day lecture by Professor Ronald Traylor on Sept. 17.

Although the idea of attending another lecture may sound agonizing to students, some talks on campus may be surprisingly rewarding.

Though the Department of History and Political Science participated in Fanfare intermittently since the beginning, it began an annual “Then and Now” lecture series in 2001. Since then, the series has grown from one talk a year. This year, the department added lectures for Constitution Day and Veterans Day rather than confining the series to October.

Dr. William Robison, department head of history and political science, said, “The people that go have a good time, and I encourage them to come participate. If they don’t like it, they don’t ever have to come back, but if they do, they’ll discover a new way to enjoy college.”

“Let’s Talk: Art” celebrates 10 years of running since its birth in fall 2008. Eric Johnson, director of the Sims Memorial Library, and Irene Nero, associate professor of art history, looked for a new challenge after settling into their jobs and found success with an art talk.

“I like to feel like art is in some ways the soul of a community, that it speaks to people in an emotional way that lets you a little bit free from your daily experiences,” said Nero. “Let’s just stop worrying about how you’re going to pay those bills, or what your job is gonna be, or am I getting my degree, that sort of thing, and it’s just a little rest somewhere in there.”

For this year, the “Let’s Talk: Art” series will have presentations on topics about Francoise Gilot and aquariums mixed with painting.

“Everybody has been heartfelt and coming from their own experience,” said Nero. “It’s not like somebody just went off and read a book and wrote a paper. It’s their experiences.”

The “Then and Now” series offers topics this year ranging from understanding North Korea and its nuclear program to “The Rocky Horror Picture Show” to an examination of the life of Edgar Allan Poe.

“It’s a great opportunity to do something where you’re not under pressure to write a paper or take an exam,” said Robison. “You just go in. You hear something. You’re entertained, and you learn something.”

The “Let’s Talk Art” series began as a way to appeal to students and offer something more fun than a usual lecture. Since then, the series has grown each year.

Robison described the “Then and Now” lecture series as a blend of education and entertainment.

“We’re teaching you about something, but we’re doing it in a framework where it’s fun,” said Robison. “There’s almost always a certain lighthearted element about the lectures themselves. I usually do something goofy sometime during my lecture, but the idea is to get people there and entertain them but also educate them at the same time.”

In October, the “Then and Now” lecture series will have a talk every Wednesday at 1 p.m. in the Pottle Music Building Auditorium with a final talk on Veterans Day. The next “Let’s Talk: Art” talk will fall on Oct. 11 at 5 p.m. in the Contemporary Art Gallery. Both lecture series are free to attend.