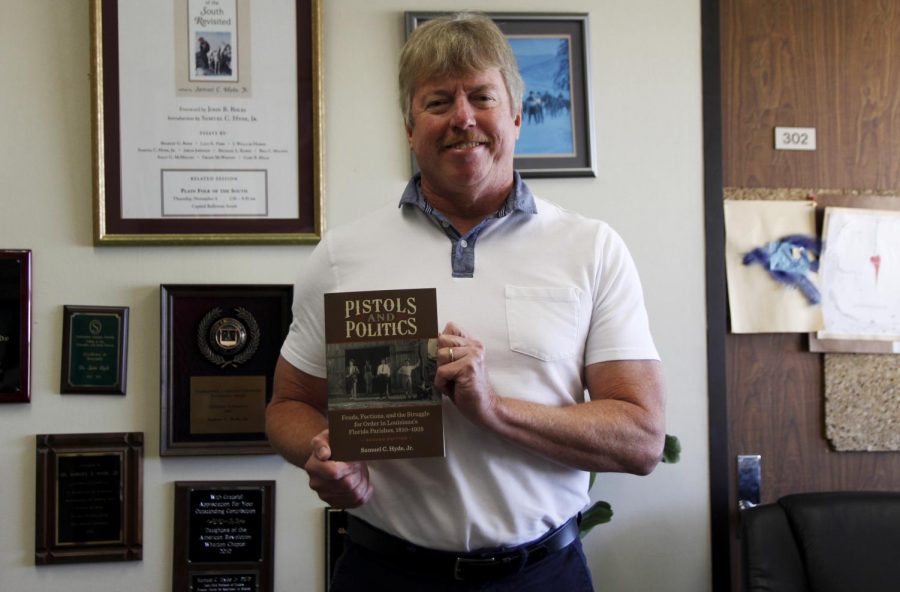 Director of the Center for Southeast Louisiana Studies Dr. Samuel Hyde, Jr, a professor of history, was awarded the “Michael V.R. Thomason Book Award” for his book on gun culture in Louisiana’s Florida Parishes.

Director of the Center for Southeast Louisiana Studies Dr. Samuel Hyde Jr., professor of history, was awarded the “Michael V.R. Thomason Book Award” by the Gulf South Historical Association for his book “Pistols and Politics: Feuds, Factions, and the Struggle for Order in Louisiana’s Florida Parishes, 1810-1935.”

The original volume for the book is “Pistols and Politics: The Dilemma of Democracy in Louisiana’s Florida Parishes, 1810-1899,” which explained events of the 19th century.

Hyde explained that the original book was about “why this region has some of the highest rural homicide rates.”

Hyde shared that he wrote the later volume as the critics wanted him to finish the story to explain the restoration of stability. He explained the objective of his book.

Hyde said, “My objective was to explain what had happened in this area, the conditions that led to spiraling violence and the dysfunctional legal system, but it also became to explain not just why it happened but also how could people live in an area where they knew how difficult it was to obtain justice that the legal system and police and services could not protect them.”

Hyde explained that he was able to understand the situation through the Nash equilibrium in game theory.

“Nash equilibrium establishes when players are in a game, so to speak, wherein they both know what the others will do, but it does not change their behavior for what they do,” said Hyde.

Hyde came up with the EAR solution for the problem of the area: education, accountability and resources.

Hyde was awarded for the book in November at the President’s Banquet at the Gulf South History and Humanities Conference in Baton Rouge.

Hyde expressed his happiness on having received the award.

“It’s one of the highest honors I have ever received because it is an endorsement that scholars peer,” Hyde explained. “Scholars are looking at it, and that is forcing reconsideration of the way we think about the history of the Gulf South. So, it’s incredible to feel that you reconfirm it. In fact, I had two other books in the past that was considered, and neither one of them won. So, I know how tough the competition is.”

Hyde explained some of the responsibilities that come with being the director for the Center for Southeast Louisiana Studies.

“We study the history and cultures for this region and try to promote and preserve that history through scholarly research, through publications,” said Hyde. “We have a television show that we do in the Southeastern Channel that’s called the ‘Florida Parish Chronicles.’ We host lectures series. We’ve got exhibits. We have the most developed archive for preserving historical documents and family collections and political papers.”

Hyde is happy to work at the university that is in the heart of the area of his study.

“One thing that makes it especially special for me is I am at the university that is right at the epicenter of what I study,” said Hyde. “I am surrounded by the information I need to do the publications, films, shows and lectures and everything I need in a daily basis.”

“I love it here,” said Hyde. “Although I never went to Southeastern myself, I have a lot of family members who did. I have been involved, worked at, or studied at seven different universities in four different countries in the world. I have never found a friendlier, nicer, more supportive from the administration arrangement in my life. I feel very lucky to be here.”