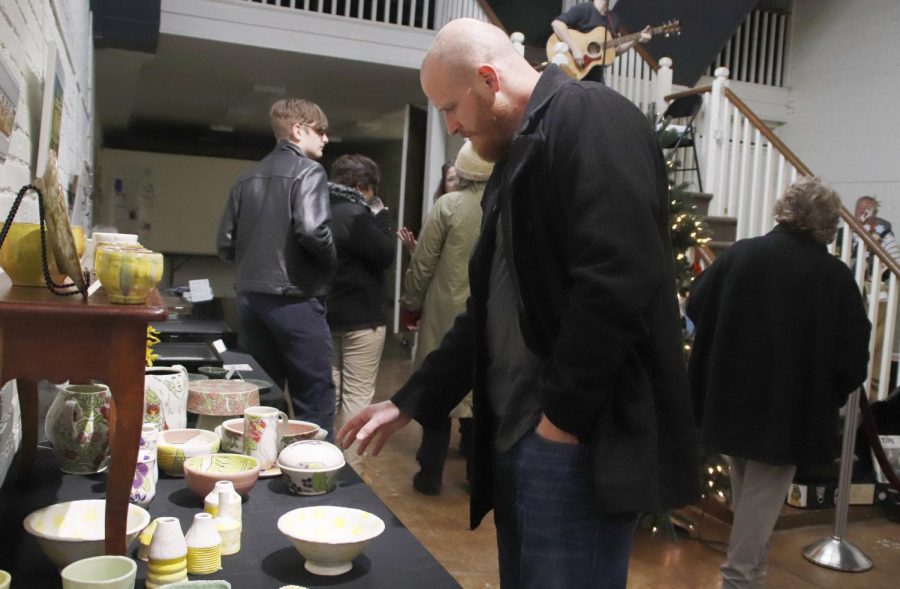 Kyle Trav checks out the artworks on display in the Hammond Regional Arts Center’s “Fine and Functional Show.” The exhibition includes pieces for sale ranging from under $20 to over $300.

This year’s “Fine and Functional Show” holds an array of items including ceramics, jewelry, ornaments and 2D art. All pieces on display are available for purchase. Prices vary to accommodate different budgets and range from under $20 to over $300. Shoppers can stop by HRAC Wednesday through Friday each week from 12-6 p.m. until Dec. 21 to check out the artwork.

“Art is a timeless gift and enriches the life of your loved one for years to come,” said Media Coordinator for HRAC Tara Bennett. “Not only will art last a lifetime, but it is filled with sentiment that few other gifts have. It also comes with value that grows over time. I find art to be one of the most original, thoughtful and fulfilling presents one can give.”

The displayed artworks come from several local and regional artists including Co-Founder of Wortman Pottery Emily Wortman who has functional stoneware pottery in the show. Many of the pieces have crawfish or handmade oyster shells on them. This is Wortman’s first year participating in HRAC’s “Fine and Functional Show.”

“I have very good feelings about it,” said Wortman. “I know a number of other people who are exhibiting at the show and people who have exhibited in the past, and so I think it’s a wonderful opportunity particularly to show our pieces to the local art audience in Hammond and surrounding areas. Since we are located on the other side of Lafayette, I don’t have that many places that I show on the Northshore.”

According to a 2006 study from the consulting firm Greenberg Quinlan Rosner Research, the pressure of giving or getting gifts was the fourth most reported cause of holiday stress. For Wortman, art makes a good gift for various situations as “something that’s more personally made rather than saying, ‘Hey, here’s a gift card to Walmart.’”

“People buy it year-round because they like the idea that it is made by an individual, not a large company or imported from India or Indonesia or China,” said Wortman. “People see something in a piece of art that they buy whether it’s a painting or picking up a bowl or mug, and it has a human feel to it. People buy it year-round for wedding gifts or anniversary or wedding registries or birthdays or just because they want to treat themselves to a wonderful mug that feels good in their hand, and they enjoy drinking their coffee out of it every day.”

Emily and David Wortman founded Wortman Pottery in 1977. Emily Wortman shared her experience of making and selling pottery for over 40 years.

Emily Wortman said, “The challenges are not necessarily making your artwork but finding venues to sell it, and over the decades, we have used many different venues whether it’s going to art markets, juried art shows, selling wholesale at gallery, consignment to a few gallery, exhibiting in some individual shows like the one you’re writing about now, and online now.”

According to Emily Wortman, the point of art selling is “to be flexible and know how to market and try to figure out how to do that because it’s constantly changing.”

Emily and David Wortman’s artwork can be found online at Wortman Pottery, their showroom or markets and exhibitions.

“They can come on out to our showroom, which is just about eight miles west of Lafayette, and so we have a large array of pottery there,” said Emily Wortman. “They can find us in the New Orleans art market typically, which is the last Saturday of the month normally.”