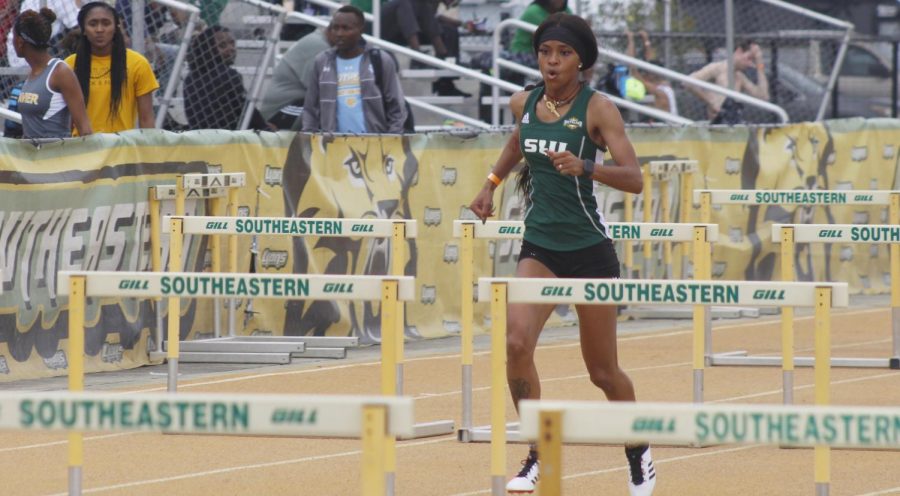 Daisha Nickelson, a sophomore hurdler on the track and field team, runs her event, the 100-meter hurdles, at the Strawberry Relays. Nickelson’s love of playing sports led her to pursue being a college athlete.

From a competitive nature to passion, different factors contribute to student-athletes’ decision to play at the collegiate level.

Kia Coleman, a freshman jumper on the track and field team, knew she was meant to be an athlete from an early age.

“I knew since when I was racing on the playground with all the little boys,” shared Coleman. “I was faster than them, and this led me to grow to like track.”

For Connor Wilson, a junior golfer, it was not until high school when he finally knew he could pursue playing golf in college.

“The high school I went to was Catholic in Baton Rouge, and we had a really good golf team,” said Wilson. “In the class of 2015, we had two guys sign up to play Division I golf. One of them is my roommate, William Meyers, and the other goes to UL. Playing against those guys every day and being able to compete with them was when I realized I had the chance to play college golf.”

According to Wilson, the moment he first fell in love with golf was because of one of his closest relatives.

“My great uncle first taught me how to play when I was 18 months old,” stated Wilson. “It was the first time I ever picked up a golf club.”

A passion for several sports became focused on a single one for Daisha Nickelson, a sophomore hurdler on the track and field team, as she found the sport she excelled in.

“I ran track, played softball and flag football,” explained Nickelson. “Growing up, I was always working out, and in PE, the teachers were like, ‘You need to be doing a sport,’ and track ended up being what I was really good at.”

Preston Faulkner, a sophomore utility player on the baseball team, explained how his competitive mentality ultimately drove him to become an athlete.

“At a very young age, I was always playing up,” stated Faulkner. “Around 5 years old, I started playing tee ball with my 7 and 8-year-old brother and his friends. My brother, along with a ton of friends from the neighborhood, would always be at each other’s houses, and we would be throwing rocks or whatnot. Everything we did was competitive. I’ve always been around elite competition and higher competition. It’s the same now as I’m a young guy playing for my grade.”

Faulkner’s strong ties with his family and friends have also helped him stay motivated to pursue playing baseball at the collegiate level.

“I’ve always had a great support system,” explained Faulker. “My parents never missed a day. My dad’s also out here every practice, and they’re here every single day. Family, friends, everybody from back home loves coming out and watch me play.”

One of the factors influencing Wilsons’ decision to attend the university was being able to continue playing with a high school friend.

“One of the biggest reasons I came here was because my roommate from high school came here,” commented Wilson. “It was nice to be able to come here and play four more years with him.”

Wilson discussed the importance of aspiring athletes to keeping their self-confidence when deciding whether or not to pursue playing a sport in college.

“There is going to be times where you doubt yourself in your decision, and you don’t think you have what it takes,” expressed Wilson. “You just have to keep believing in yourself. That is the key to being good at anything. It doesn’t matter if others believe in you for as long as you believe in yourself and put your mind to what you’re doing, then you can do it.”