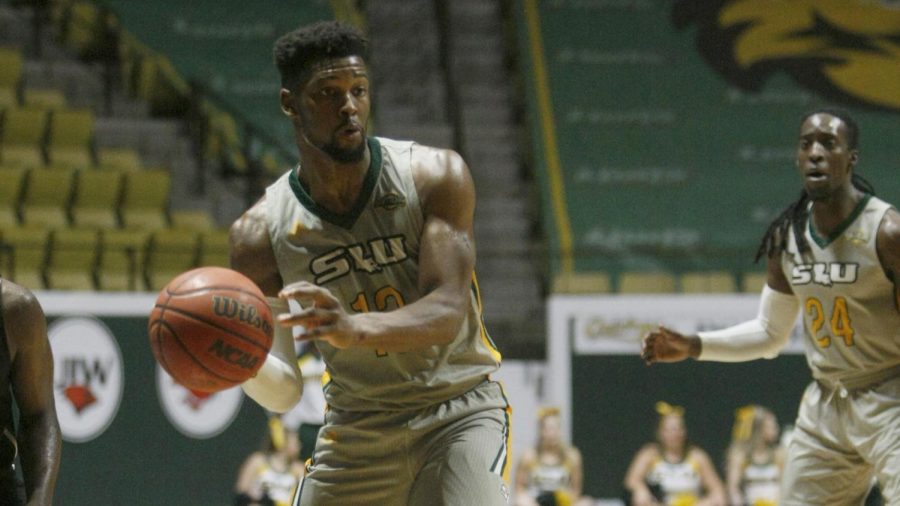 The Dos Equis 3X3U Tournament earlier this month gave Moses Greenwood, a senior forward for the men’s basketball team, the chance to showcase his athletic skills.

Senior players from 33 Division I conferences competed. Each team was comprised of four players including one substitute.

“It was an amazing experience,” shared Greenwood. “It was part of the final four where they call the top seniors in each conference to come down to Minneapolis, Minnesota and play for a chance of $150,000.”

The tournament gave Greenwood the opportunity to practice his skills against new opponents.

“I got to play against different players and test my game out against other top seniors who are probably trying to do some of the same things I’m trying to do,” explained Greenwood. “It put me where I needed to be as far as the level of talent I needed to be on, playing against future pro guys.”

“People from bigger schools, they started to respect us more after beating some of the top teams, like the Atlantic Coast Conference,” said Greenwood. “It boosted my confidence considering the fact that we were winning and I was producing what I needed to do.”

Greenwood led the university in scoring and rebounding this season and was named first team All-Southland Conference. He also led the conference in field goals, was third in scoring and fifth in rebounding.

To ensure success on the court, Greenwood focuses on playing hard.

“That’s my thing,” shared Greenwood. “I play hard, and everything else will take care of itself whether it is on defense or offense. I know what I can do on offense, a variety of things I can do. I come in and try to outwork the opponent. If I do that, then everything else takes care of itself.”

Greenwood plays multiple sports, and he found his beginnings in track, football and basketball.

“My sister, just seeing her play in high school, that helped me to plan out that I wanted to play basketball,” said Greenwood.

During Greenwood’s freshman year of high school, his uncle explained what possible health problems Greenwood could face if he chose to continue playing football.

“He was telling me about the difficulties that come with football after life surgeries and concussions,” shared Greenwood. “He was basically trying to tell me to pick something that I won’t have to regret after playing. That really encouraged me to play basketball.”

After high school, Greenwood was drawn to Southeastern by a familiar style of gameplay.

“Coach Ladner and my head coach’s dad, they are like best friends,” stated Greenwood. “They have the same unique style of basketball play, a balanced attack on both ends of the floor in basketball. They coach the same. I knew it was going to be rough, rigid, but I knew what I was coming into already based upon them being close and having the same unique style of play.”

Greenwood credited his family for supporting him throughout his career.

“My mom and dad, they’ve come to every home game since I got here,” shared Greenwood. “They really support what I do. I try to put their input in on whatever I’m doing whether it’s getting an agent or anything that I’m doing.”

After four years of collegiate play, Greenwood looks to elevate his basketball career to the next level and play overseas.

“I’m not 100% sure, but I’ll probably be signing with an agent later this week or early next week,” said Greenwood. “I just got to go show my stuff and see where it goes from there.”