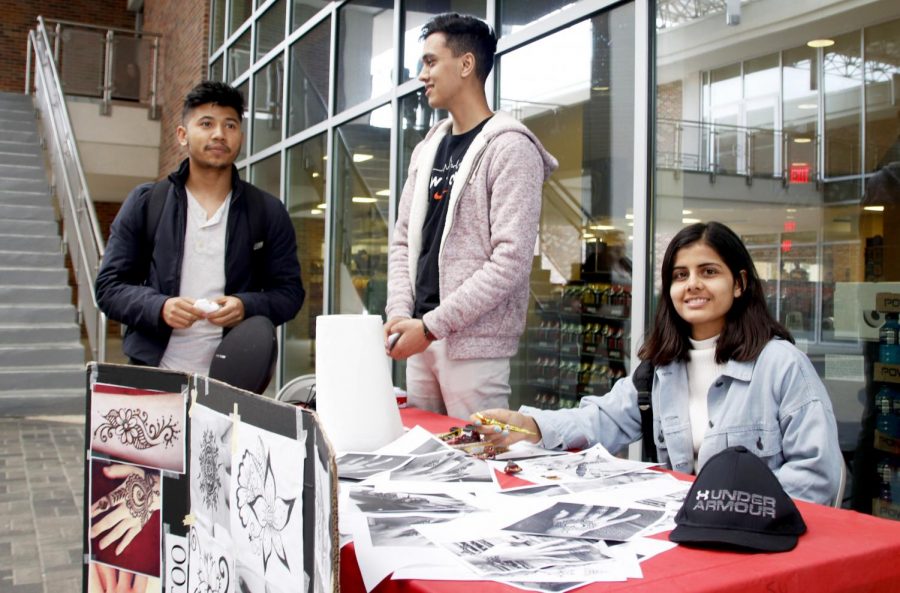 Members of the Nepalese Student Association at Southeastern sell henna tattoos to raise money for their organization. The university has 123 organizations students an join.

Immersion into campus life can start with the 123 student organizations offered at the university.

By offering opportunities to network, develop leadership abilities, be involved and have fun, student organizations can help sculpt a more well-rounded resume.

Thora Hughes, a junior general studies major, has already reaped those benefits during her undergraduate career through the Southeastern Sociological Association.

“I know I am definitely being considered for a job right now because of the fact that I am the events coordinator for SSA,” said Hughes. “I’d say that’s a big resume helper. I’m able to put it in a cover letter. I’m able to put it in a resume, and not only does it help in the sense of like, ‘Hey, this person has that job already. They can come over here and get this job,’ it helps in the sense of teaching you more about jobs that you may want to pursue.”

Zachary Rogers, interim coordinator of leadership and service at the university, elaborated on the importance of joining a student organization.

“Being involved in a student organization is vital to a student’s education because of the unlimited possibilities granted,” shared Rogers. “Being involved at Southeastern allows students to connect with fellow students, continue their learning outside of the classroom, network with possible future employers, enjoy your undergraduate years, and have pride in the university.”

Before getting involved in extracurriculars, Hughes was apprehensive that joining a club would take over her life.

“I was afraid that I wouldn’t be able to focus on schoolwork, and really if you have the right balancing act, the organizations don’t take over your whole life,” explained Hughes. “They just add to your life. It’s more of a benefit than a drawback.”

Graham Guillory, a senior music major, chose to get involved with the Southeastern Guitar Club because it related to his field of studies.

“I’ve gotten many offers to play gigs for various functions inside and outside of the school as a result of being a member of the guitar club,” said Guillory.

Hughes recommended that students start looking for an organization to join as soon as possible.

“You’re not going to like every club that you join, and that’s okay,” stated Hughes. “But, there is a club out there for you, and it makes a tremendous difference when you’re coming into school. You don’t know how different high school is from college until you get to college, and being in an organization might help you ease into college a lot more.”

Rogers gave four points to consider before choosing to join an organization.

“When considering an organization, join something that will have the following effect on you,” said Rogers. “A. Helps you grow into a better person or leader, B. Challenges you to think and hold an opinion of your own, C. Allows you to network and prepare you for life after college, and D. Join something that is meaningful to you.”

Through his time as an undergraduate student, Rogers gained valuable employment skills from many organizations.

Rogers shared, “I joined six organizations as an undergrad student, and each one provided me the tools to learn outside the classroom, grow as a student and a leader, connect with future employers at the university, and each organization meant something special to me, which made me want to get involved even more.”

For students interested in learning more about organizations at the university, visit the Office of Student Engagement, located in the Student Union in Room 2307.