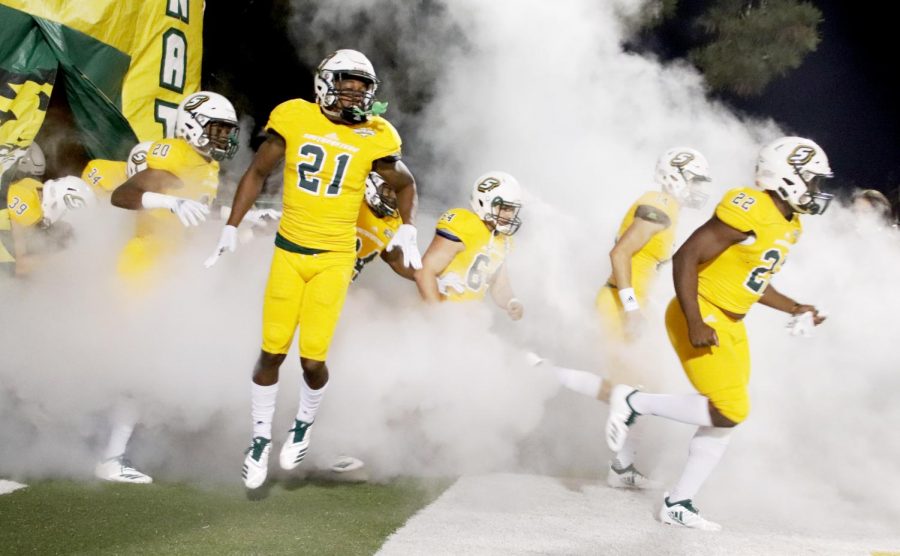 The Lions football players storm the field before a game. The football team is hard at work with summer practices right now as they prepare for the opening game against Jacksonville State University on Aug. 29 in Strawberry Stadium.

This year, the Lions will open up their season at home against Jacksonville State University on Aug. 29.

With Jacksonville State’s impressive history – being ranked first in the Ohio Valley Conference since 2014 – Frank Scelfo expects the first game to be a tough one.

“They truly have a great program, and they have been consistently good over a long period of time,” shared Frank Scelfo. “They are where we want to be as a football team. We hope to attack them offensively with a good rush and pass game, but when it comes down to their quarterback Zerrick Cooper, no one has stopped him ever. We can try to limit what he does, but he’s a very talented athlete.”

According to Frank Scelfo, the Lions are working hard to improve from their 4-7 season last year.

Frank Scelfo also believes the team lacked maturity at the beginning of last season but showed growth throughout the season and after.

“The immature people become fewer and fewer, so that will lead to less mistakes on the field,” explained Frank Scelfo. “Last year, I thought we did a good job growing offensively. We had some flashes on defense, so you take that and you feel good about it. But out of all three areas, we were most consistent on special teams. I think that tells you how good your team is when special teams is your best area.”

Frank Scelfo is expecting this to increase continuity.

“The guys we brought in and hired are technicians,” explained Frank Scelfo. “We upgraded our staff to the point where they know our league. They know our talent level, and they know how to coach.”

Frank Scelfo is reluctant to name a player to keep an eye out for due to a history of surprises.

“I have predicted in the past years what players to watch for, but I have been wrong every single time,” stated Frank Scelfo. “Each and every season, a new guy steps up, and he isn’t on your radar.”

“I think they did a good job keeping the intensity throughout every game this season,” said Wells. “The team had a good ‘no-quit’ mentality, I think. There is going to be early season challenges with them facing Bethune-Cookman and Ole Miss. Jacksonville State will be an early test also at Strawberry Stadium, but I think Coach Scelfo will do a good job in his second year because he will be more stable and locked in.”

The season schedule and tickets can be found online at lionsports.net. Games are free to students with a valid student ID.