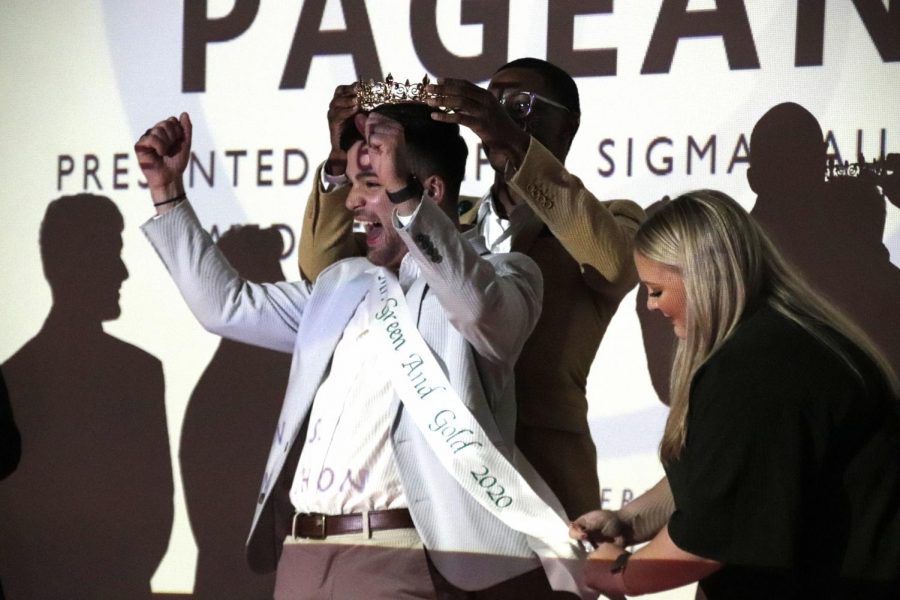 Tyler Hoskins was crowned Mr. Green and Gold 2020 on Nov. 6. Alpha Sigma Tau hosted the pageant as a chapter fundraiser.

The sorority hosted the pageant on Wednesday, Nov. 6 at 7 p.m. in the Student Union Theater.

“It feels amazing,” shared Hoskins. “I honestly decided to do it like two days ago, and I had to throw all of this together really quickly, but I think it looked really good and I’m really happy.”

Hoskins competed in this year’s pageant as a supportive friend of the AST chapter and its members.

“A lot of my friends are in this sorority, and I love their chapter as a whole,” explained Hoskins. “So I figured, ‘Why not?’ I’ve never done anything like this ever in my life.”

Although this was a fresh experience for him, Hoskins enjoyed the evening and the pageant atmosphere.

“It was amazing, and I love it,” stated Hoskins. “I would honestly do it forever now.”

Shelby Johnson, senior marketing major, is AST’s director of fundraising, and she was one of the mistresses of ceremonies for the event.

Johnson explained that she enjoyed the evening as well.

“It’s always fun emceeing and always fun being able to put on something for our chapter,” said Johnson.

Johnson believes Mr. Green and Gold was a success this year because of attendance and support from other organizations.

“I think we had a lot of different other organizations out here as well that came support us, so I think that in itself is a success to see the bonding between all of the Greek life that came out here,” shared Johnson.

In addition to the fundraising aspect of the event, Johnson describes its significance and why the chapter continues to host the pageant annually.

She explained that there is a bond between AST and the university and that the pageant is a complement to that.

“This is a big fundraiser that we put on,” noted Johnson. “AST’s colors are green and gold, and Southeastern kind of adopted them from us, so we felt like it was kind of like a good way to promote our chapter as well as connect it with Southeastern since we kind of have that bond.”