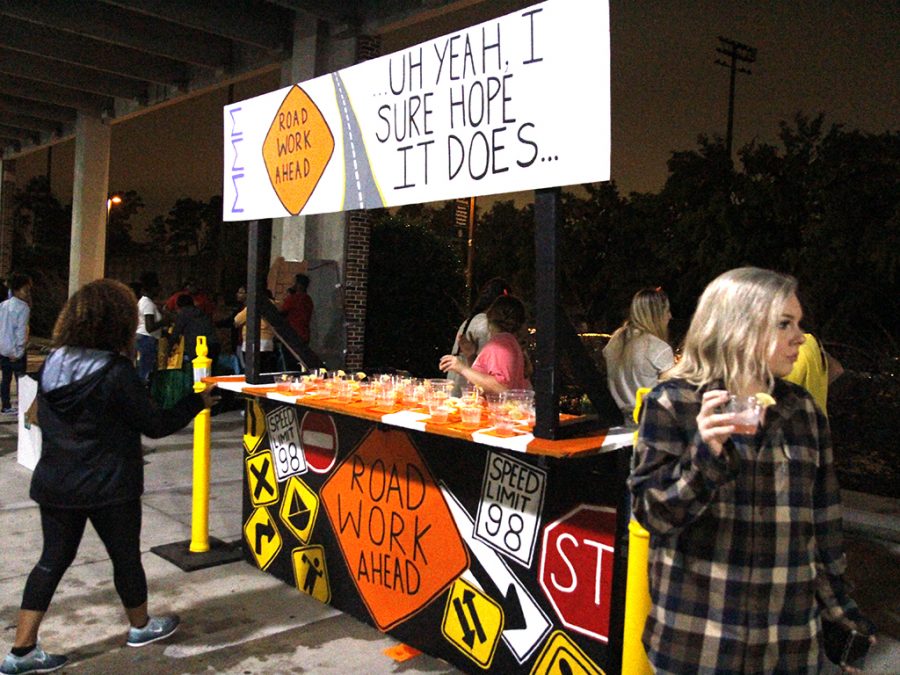 Sigma Sigma Sigma sorority hands out drinks under their display during the 2018 Mocktails. This year, the event will take place outside of the War Memorial Student Union instead of the parking garage.

From a guest panel to a mechanical bull, an annual event is seeing multiple changes this semester.

Hosted by the Office for Student Engagement and the Campus Activities Board, “Wild, Wild Western Rodeo Mocktails” will take place on Nov. 14 at 6 p.m. on Union Ave. directly outside the War Memorial Student Union. Mocktails is an event aimed to spread awareness of alcohol abuse by hosting a presentation, followed by a competition, where student organizations concoct non-alcoholic beverages for attendees to enjoy.

In past years, a guest speaker has been invited to speak to attendees about alcoholism and its dangers.

Zachary Rogers, interim coordinator for the Office for Student Engagement, explained how this aspect is changing this year.

“The Office for Student Engagement is doing a partnership with the University Counseling Center, and they’re actually having a panel of individuals who have had alcohol problems in the past, and they’re in recovery or have recovered, and it’s going to be more of an open discussion,” said Rogers. “So, it will be more involvement from the audience and from the panel. So, it would be a really cool partnership and something new that we’re doing.”

Nick Elliott, advisor for CAB, shared that the location is changing from the parking garage to the circle drive outside the union because in previous years, there was a large period of movement between the presentation and the drink-tasting and booth portion.

“It’s just a lot of shuffle and transition – wasted time to get in your vehicle and go to the parking garage and do that,” stated Elliott. “So, we’re trying to eliminate that little shuffle in the middle and allow it to be a little more convenient for students to kind of continue the event other than, ‘OK, you went to the panel. Pause, meet over here in 30 minutes to continue the event.’”

Rogers expressed that coordinating with CAB will make the event more prominent than before.

“It’s going to make this event much bigger, and we’re hoping to have even more students than usual who attend,” explained Rogers. “So, any students are welcome to come and do the mechanical bull and try out the drinks, eat free food and try to get to know your Southeastern community better while learning about alcohol awareness – and it’s an opportunity for students to network with other people on campus.”

In addition, there will be barbecued food, courtesy of Aramark, to contribute to the theme of this year’s event.

“Usually there’s pizza, but we’re just trying to make the theme more as one big event other than just each table,” explained Elliott.

CAB is adding a mechanical bull for participants to enjoy.

“Our committee really wanted a mechanical bull, and so, we said that this would be a great thing,” said Hannah Daniel, graduate assistant for CAB.

“We have been preparing our booth and drink that we’ll serve for several weeks now,” explained Seal. “We are so excited and can’t wait to see everyone’s creative ideas for this year.”

Tyron McLemore, Kappa Sigma man of the year, shared that his fraternity is working to promote the message of alcohol awareness at Mocktails.

“We are focused on making sure our booth and drink stand out, but most importantly, we are all doing this for a great cause,” said McLemore. “Win or lose, Kappa Sigma loves the fact that we are spreading awareness about Mocktails.”

With all the changes to this year’s event, Rogers is excited to see the impact they will have on the flow of Mocktails.

“This is just a great event for anyone to attend,” said Rogers. “It’s going to be really exciting to have a panel this year instead of just one guest speaker. So, we’re looking forward to a very successful Mocktails.”