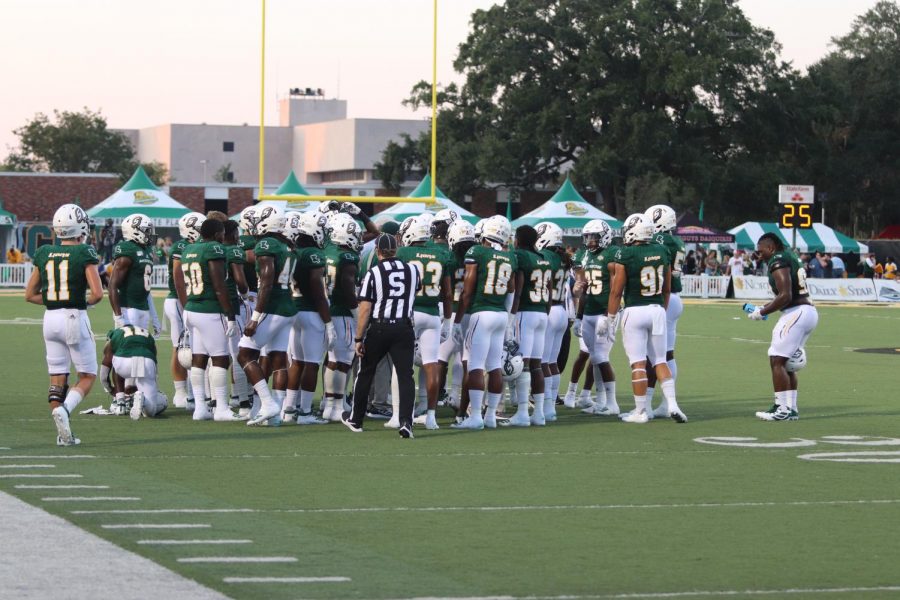 The football team takes a timeout during the first quarter of the Aug. 29th Jacksonville State game. The Lions knocked off sixth ranked Gamecocks 35-14.

The Green and Gold, who currently sit at a 6-3 record, have had help from some new faces this season on all three sides of the ball.

Austin Dunlap, a freshman punter, explained how it felt to be named the starting punter at the beginning of the season.

“It feels really good to have everyone trust in me and believe in me,” said Dunlap. “I just had to trust myself during the process and it feels great to be part of a winning culture.”

Dunlap, a native of Slidell, discussed how it is a dream come true to be punting at the university.

“I would have never thought that I would be doing this much at such a young age,” said Dunlap. “It has been a dream come true to come here, join the team and be able to perform during my freshman season.”

Gladar Huszar, a freshman linebacker, shared how it feels to start as an underclassman.

“It doesn’t feel like anything special to be honest,” shared Huszar. “I just try to come out here and play with everyone else like I have been here a while.”

After being recruited from Destrehan High School in 2018, Huszar admitted he did not think he would get much playing time freshman year.

“I thought it was going to take at least two years to get in the lineup and get some playing time,” stated Huszar. “I was not trying to get too ahead of myself when I was getting recruited. I was really surprised when I found out that I would get the opportunity to play.”

The linebacker explained what his favorite part about playing for the university is.

“We are like a big family,” expressed Huszar. “Not one player or coach is left out. We win as a family and lose as a family.”

Along with winning the championship for the NCAA Division I Football Championship Subdivision, Huszar shared another goal he planned to achieve before he graduates from the university.

“I want to bring a championship to Southeastern,” said Huszar. “After that, I want to try and be an All-American linebacker and get drafted in the NFL.”

Ed Magee, a freshman wide receiver, was also under the impression that he would not get much playing time in his first season when he was recruited.

“I didn’t think I would get much playing time my first year, once I signed with the team,” commented Magee. “But I knew if I would work long and hard enough, I would have the opportunity to play.”

Magee described how it feels to be a part of the fifth-ranked offense in the country.

“It feels great to play on such a good offense,” said Magee. “As a freshman, it took me a little while to get used to the pace of the game and learn the playbook, but now I have the right confidence to move forward.”

With the Nov. 16 35-14 win over Abilene Christian University, the Lions’ next battle will be on the road against Nicholls State University on Nov. 21 at 6 p.m.