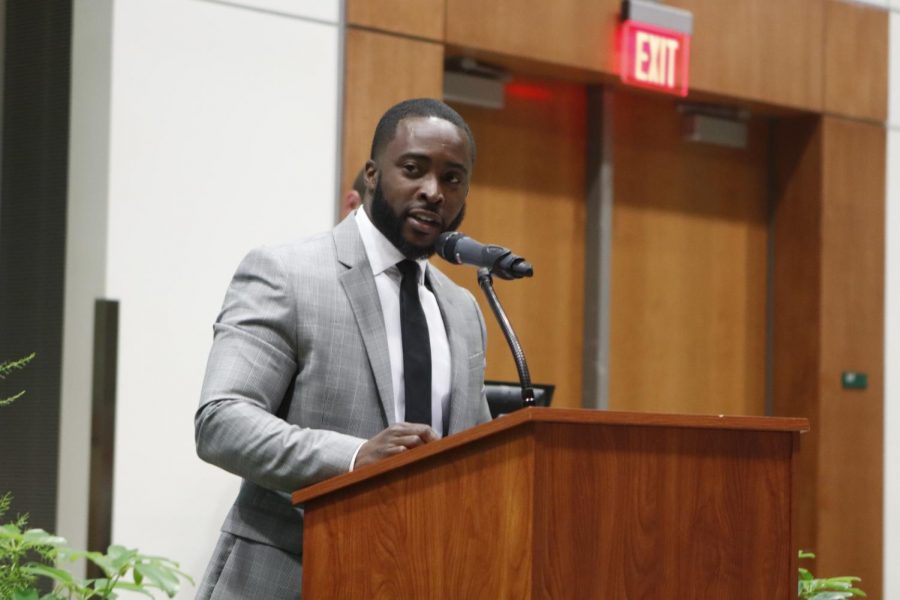 Dr. Gabe Willis, dean of students, speaks to the audience.

Public speaking is used from the classroom to the workforce, and practice can make one’s speech an effective tool.

According to the article “What is Shyness?” published by Psychology Today, about 40% of Americans consider themselves shy, and of that demographic, the majority believe it is a personal problem.

Megan Mosher, instructor of communication, feels that even though public speaking can be learned, it should also come naturally.

According to Mosher, having a well-written speech allows for an easier presentation.

Mosher explained, “If you have a well-written speech, and you have practiced it, then you’re going to be more confident when you deliver it because you’re not going to be constantly looking at your notes or trying to figure out, ‘Oh what was I gonna say here?’”

“It’s the only way we really have a civic engagement,” said Madere.

Elizabeth Hornsby, professor of communication, shared that even though people do not realize, people perform in public speaking every day.

“There is a range of public speaking environments that students often find themselves in,” commented Hornsby. “Whether it’s providing a toast at a wedding to giving a presentation at your job/club/organization, that’s all public speaking is. It is a pervasive part of our lives.”

For those who would like to be public speakers, but are nervous or afraid, there are tools and trainings available to improve their confidence and skills.

“Your goal is to be confident, as calm and as poised as possible and to have good gestures that are not distractive,” said Mosher. “If you’re doing all kinds of distracting gestures, then it’s going to throw your audience off.”

Mosher believes it is difficult to achieve perfection in public speaking.

“Martin Luther King’s ‘I Have a Dream’ speech wasn’t perfect,” said Mosher. “There were places that he knew he messed up or he had pauses, but I’m sure he didn’t want to, but no one ever remembers those.”

Fay Boudreaux and Shawndee Fluker, professors of communication, partnered up in creating a class for students wanting to improve public speaking skills, but have shy tendencies or fear crowds.

“My colleague Shawndee Fluker and I co-developed a public speaking course for students who experience ‘higher than average’ levels of communication apprehension,” said Boudreaux. “Many people experience some form of public speaking anxiety, but these symptoms can be debilitating for some individuals.”