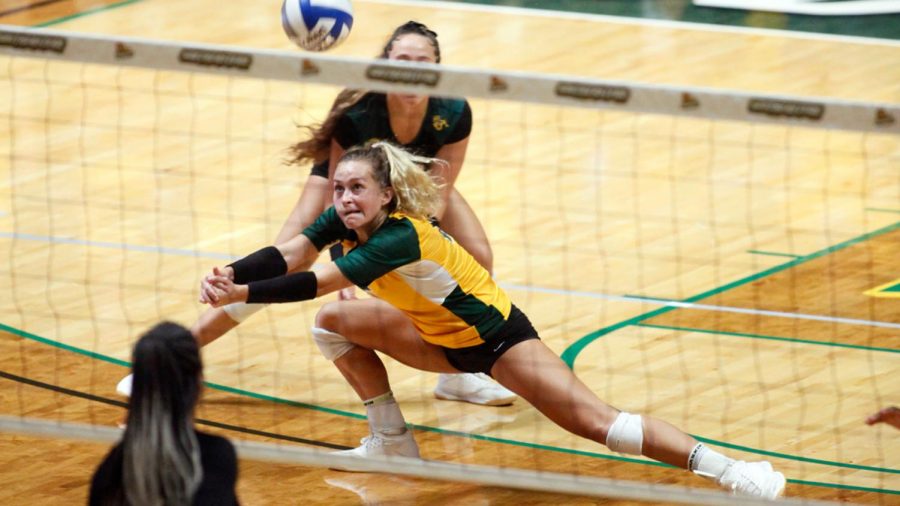 Junior outside hitter Caroline Golden goes for a dig. The Lady Lions improved with 12 more wins in the 2019 season than the 2018 season. The Lady Lions will start their inaugural beach volleyball season in the 2020 spring semester.

Caroline Golden, a junior outside hitter for the Lady Lions Volleyball team, completed her third season with the university this year.

Golden explained what drew her to volleyball.

“I think my interest started from watching my sister play,” explained Golden. “Just kinda watching from the sides.”

Her interest in volleyball increased when she played during her senior year of high school at Fontainebleau High School.

“Definitely high school helped a lot,” said Golden. “Staying in the club, for sure.”

Golden shared what helped her improve as a player since joining the university volleyball team.

“I would say maturing and learning how to direct the ball,” explained Golden. “And also staying observant to the other side of the court.”

Golden talked about the highlight of her play in a game against Southern University at New Orleans.

“For sure this year,” explained Golden. “I would say the SUNO game where everybody thought that we didn’t have a chance, and we came in and upset them, and that was a game where we played as a team.”

“I would say Coach Jeremy,” said Golden. “Whenever he became coach in first year, he kind of expected the best out of all of us. And we’re doing a great job so far.”

Apart from the court, Golden maintains some interests but keeps her spirit of playing volleyball as a primary focus.

Looking ahead, Golden has a mindset for her future at school and beyond.

“I want to grow more in the leader aspect,” shared Golden. “Just demanding more respect and really coming out and being that player that’s consistent and all for the team. I plan to do occupational therapy once I graduate, and then I hope to maybe coach a little of volleyball. I would love to coach college, but obviously that would take some steps and working up to it, so I’d probably coach at club first.”