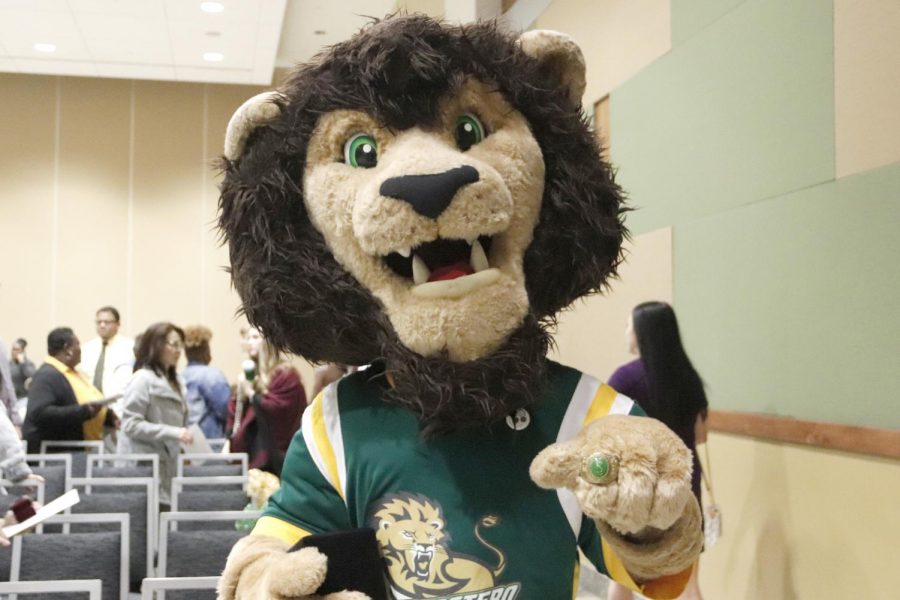 Roomie the Lion poses for a picture with his graduation ring. Graduating seniors received their rings from Dr. John Crain, president of the university, during the Ring Ceremony on Dec. 4.

A ring ceremony for graduating seniors was held by the Alumni Association and had an extra surprise at the end as Roomie the Lion also received his graduation ring.

The ceremony was held on Dec. 4 in the Student Union Grand Ballroom and started with Dr. Joe Burns, a graduate coordinator, as the master of ceremonies. Following soon after was the presenting of the rings, conferring of rings presented by university president Dr. John Crain, the oath of pride and the alma mater sung by Elizabeth Langley.

The ring ceremony is held for participating students to collect their official university rings. The students walked up to the stage, received their ring and walked off to receive a scroll from Roomie, Miss Southeastern, Janine Hatcher and Mr. Southeastern, Brian Williams.

“It’s very, very exciting,” said Abadie. “I was here whenever my sister got her ring, and I was just like ‘I can not wait till it’s my turn to get a ring.’ I know graduation isn’t another year for me, but it just makes so much more real and it makes it feel closer even though it’s not any closer than before I got the ring. It’s just super super exciting.”

At the end of the event, there was a surprise announcement to the students and members of the audience. Roomie the Lion was called upon to receive his ring. This was the first time Roomie the Lion has ever received a ring of his own.

After the ceremony, the ring bearers mingled with each other and family members, as well as took selfies at a selfie spot.

The graduating seniors will wear their new rings on their graduation ceremony and will turn them outwards to show they have officially graduated.