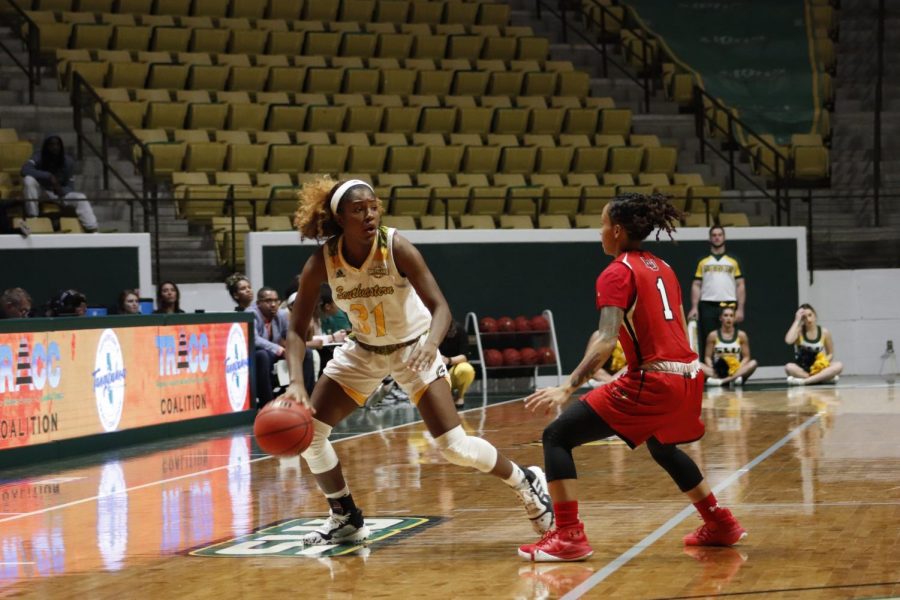 Freshman guard Alexius Horne brings the ball down court against Lamar University. Horne finished with 13 points, one rebound and one assist.

The Lady Lions losing ways continued on Wednesday night against Lamar University with a final score of 65-57.

With the loss, Southeastern fell to 3-6 and opened up Southland Conference play in the loss column.

Head coach Ayla Guzzardo explained how the Lady Lions messed up on some of the easy things.

“We missed a lot of easy baskets down low,” commented Guzzardo. “It was the little things that really killed us tonight. We had a few turnovers that hurt us in crucial moments. Our team is young, we are going to make those kinds of mistakes, but we played hard and competed with them the entire time. I think on the defensive end we turned it up and that really helps.”

The second-year head coach shared how a slow start in the first quarter hurt the Lady Lions.

“The first four minutes are the most crucial point of the game to us,” said Guzzardo. “That really sets the tone of the game and I think that’s where they got us early on. That really set the tone for the entire game, but that goes back to our maturity so you know they’re going to learn. I am excited to see what direction this team is going in.”

With the Lady Lions, next game against Houston Baptist University Guzzardo shared what the team has to improve on in order to secure their first Southland victory.

“We have to make shots,” stated Guzzardo. “We hold a team to 65, but we have to start making more shots to give us a chance to win. That comes from the majority of the team. I think Caitlyn Williams had a fine game; she has been in a drought for the last couple of games but she really stepped it up tonight.”

Tipoff against Houston Baptist is slated for Dec. 21 at 2 p.m. in Houston, the Lady Lions will look to improve to 4-6 on the season.