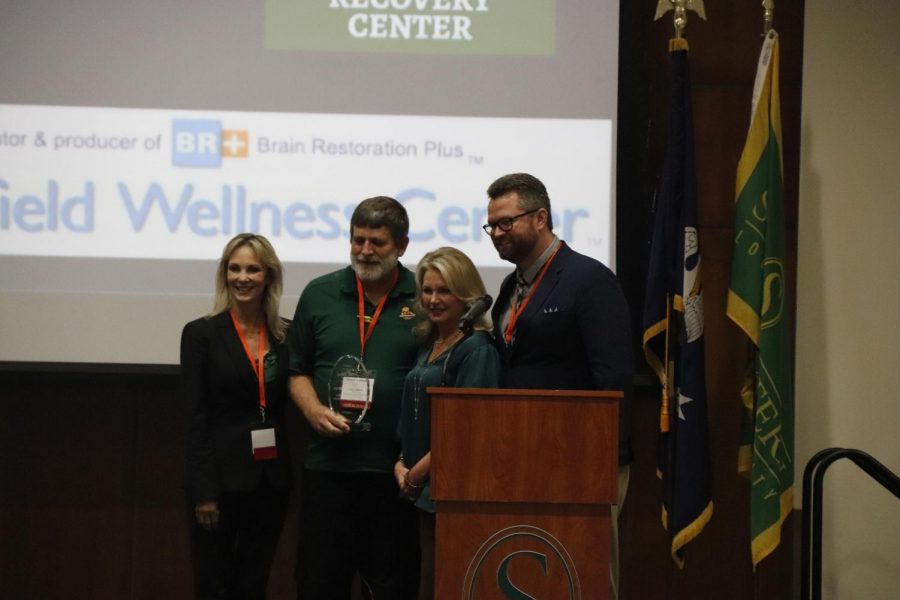 The University Counseling Center held the third annual Terrell Conference as a learning and networking opportunity for mental health professionals.

The conference was held on Jan. 9-10 in the War Memorial Student Union. This year, there were 177 people in attendance, with 34 organizations participating in the networking expo. It featured multiple workshops and presentations from guest speakers, including keynote speaker Dr. James S. Flowers, LPC-S.

In his presentation, Flowers explained different kinds of assessments and treatments for chronic pain patients, including treatments that go beyond physical evaluations.

“If you go in with an identified problem, and they put that person in treatment, they’re missing almost 360 degrees of treatment and therapy,” said Flowers. “We’re talking about the mysteries of the human condition. When I say the human condition, I truly mean who we are as a human being. We can’t just look at one area of our life. We have to really look at our entire life.”

Flowers also emphasized the importance of treating each patient individually based on their own needs and personal history.

“It’s personalized,” explained Flowers. “You focus on the individual. There will be ten people in a group doing an intensive outpatient program, and every one of those ten people is an individual. You have to look at the symptoms, the history, and not do the same thing for each person. Then they can go to group and discuss the same topic.”

Millies Reeves, a PLPC at Bridge House/Grace House Treatment Center, believed that Flowers’ speech helped her to understand the connection between emotional and physical pain.

“I think it was really interesting,” commented Reeves. “It made me think about my diagnosing and doing evaluations, and then just thinking about pain in a different way and the emotional side of it. I have some clients I work with who struggle with that.”

During the conference, attendees could tour the new Lion up Recovery Space that is included as a part of the Lion Up Collegiate Recovery Program.

“We were able to launch collegiate recovery here at Southeastern, which would be the first in the state of Louisiana,” stated Baldwin. “Collegiate recovery programs are not designed as treatment programs, they are designed to offer extended recovery and support on college campuses so your student has a safe harbor and a community of like-minded others to be with.”

Stacey Duarte, LPC-S, was impressed by the intensive resources that she learned are available to students through the recovery program.

“I think it’s a really wonderful program,” said Duarte. “They used to offer a specialty in addiction, so it’s nice to see that they found a way to expand that and to provide these resources for students and to do something that’s so unique and really necessary. I thought it was really interesting to see the depth of the program.”

On the second day, the participants broke out into small groups to learn about specific topics from multiple guest speakers.

Amy McClain, an academic advisor at the university as well as a committee member for the event, explained the purpose of the event.

“The purpose is to have counselors in the area have a way to connect with one another, an opportunity to network and to discuss topics that address the needs of those that work even in private practice, in hospital settings and even in collegiate settings like this,” shared McClain.

The largest event of the second day though was the giving out of the first annual Tom Terrell Award, named for the university’s first director of the University Counseling Center.

The winner of the award was the current director of the UCC, Dr. Peter Emerson. Emerson described his relationship with Terrell from when he started working at the university.

“As I said before, I came here when Tom was first here too, in 1987 and he’s a good friend of mine,” recalled Emerson.

Terrell played a role in establishing licensure in Louisiana for counselors. Emerson described how it feels to receive an award bearing the name of his colleague.

“He started the whole licensure movement here in the state for us counselors and so I’ve always respected Tom,” said Emerson. “So it’s wonderful to be considered for something that has his name on it.”