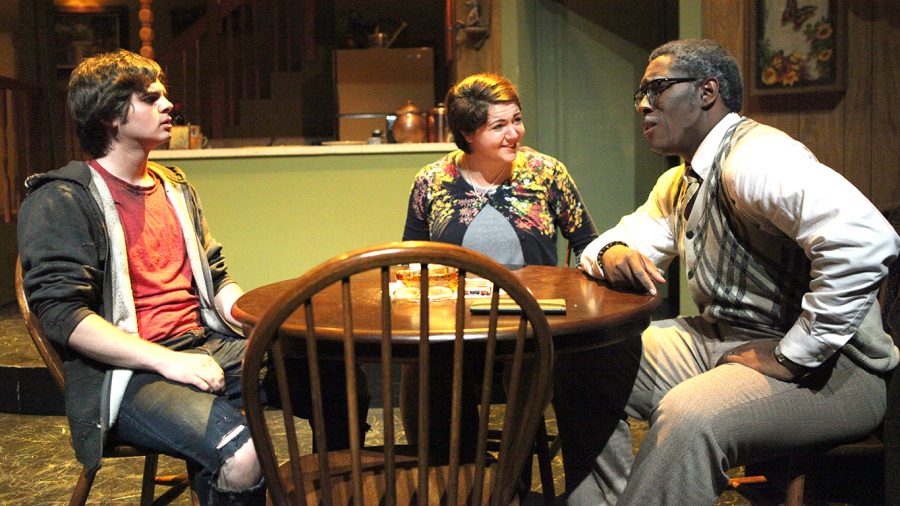 The university’s theatre program produced the 2016 Inkslinger Playwriting Competition winner, “Why Are You Nowhere,” by Ethan Warren, in the spring of 2017. Inkslinger allows aspiring playwrights to have their work come to life on stage.

An annual competition at the university provides emerging playwright opportunities to see their work produced on stage.

The 2020 Inkslinger Playwriting Competition challenges any playwright to submit their original scripts. Hosted by the university’s theatre program, the coordinators will be accepting script submissions until Apr. 1. This year’s winning play will be produced in the spring of 2021.

Initiated in 2014 by James Winter, associate professor of acting and directing, Inkslinger was created to allow aspiring playwrights to be recognized by the public.

“What I wanted to do was create a playwriting contest and use our students and our university as a place for emerging playwrights to get full productions of their work, which really helps to get published in the playwriting world,” stated Winter.

Inkslinger receives hundreds of submissions from all over the world, not just locally. Because of this, Winter says that the funds from submissions are used to bring the winner to the university to see their play produced.

“The prize for the playwright is not only do we do a full production of their show as part of a mainstage season, but we actually fly them in, and they can come in and be a part of the rehearsal process for a few days,” claimed Winter. “But usually, they come in to see opening night and actually see it performed, and we house them of course. We usually put them in the university, and they get all of that for winning. We get well over 100 scripts per year, sometimes we get 200, and that money allows us to fly these people in and house them and advertise the contest.”

According to the university website, the contest is open to all ages, and submitted plays must be original, professional and unpublished. Only full-length plays are accepted, and they must appeal to a college-aged audience. Included is a submission fee of $10.

The winning play of the 2019 Inkslinger competition, Exit 27 by Aleks Merilo, will be performed March 10-13.

“Exit 27 is based on true events of the ‘Lost Boys of Utah,’” stated Winters. “The play follows four young men who have been excommunicated from the polygamous Mormon fundamentalist group, Church of Jesus Christ of Latter Day Saints, and their fight to survive until they can find salvation.”

Winters shared what set the winning play apart from other submissions.

“I think what stood out about the piece this year was how raw the story is,” mentioned Winters. “The story we see unfold is one of passion and desperation that is very palpable for the audience. The play is visceral, which certainly helped make it to the final round and eventually being chosen as the winner.”

For the theatre world to remain in touch with modern-day society, Winter mentioned that recently-developed plays must receive audience support.

“New plays are the life and blood of this art form,” commented Winter. “If we don’t produce new work, then we’ve almost become like some sort of weird living museum or something. We’re no longer current. We’re no longer talking about things that are in the forefront of the public eye. Come out and support new works. You might not recognize the name because it’s never been done before, but Inkslinger winner could be on Broadway in five years.”

Scripts for the competition can be emailed to [email protected] Submission fee can be mailed to the following address:

For more information regarding the competition, visit the theatre program webpage on the university website.