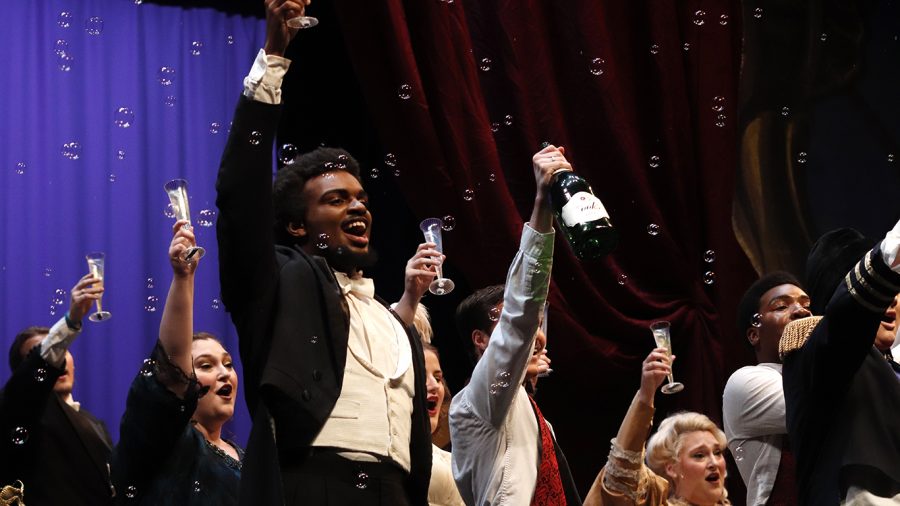 “Die Fledermaus,“ a comic operetta, was performed by students at the Columbia Theatre for the Performing Arts on Feb 6-7. The plot centered around a couple experiencing infidelity within their marriage.

The start of a new semester brought students and guest director Rachel Harris onto the stage of a local theatre to perform a century-old operetta.

University students performed “Die Fledermaus” at The Columbia Theatre for the Performing Arts on Feb. 6-7.

The production is a comic operetta composed by Johann Strauss II, centered around a couple experiencing infidelity within their marriage.

The three-act show was put on by the Opera/Music Theatre Workshop.

Ryan Blanchfield, a senior music major, played Frank, warden of the local jail, in the show. Although the cast rehearsed for three months, Blanchfield elaborated on the impact of performing in front of a live audience.

“There’s something about a live audience that you can’t stimulate in rehearsal,” said Blanchfield. “You get all of the cogs together, and it’s like just missing that one last little nudge across the finish line. And then you put the audience in front of you, and they’re laughing, and it gives you this adrenaline high that is impossible to replicate.”

The talent of students this year led to the production of “Die Fledermaus,” according to Blanchfield.

“We did this show because I think the directors realized that we had talent in place this year to do a bigger show,” mentioned Blanchfield.

Cameron Bradley, a senior music major, commented on the improvements he noticed from his colleagues.

“Each performance is pretty different,” said Bradley. “They have improved their being able to keep in time and everything. I know a lot of these vocalists, and it’s amazing seeing them becoming opera and singing onstage.”

As a student who has attended many university performances, Bradley elaborated on the importance of attending them.

“I’ve been attending operas at Southeastern since I got here actually, because in my opinion, I think supporting music everywhere is just a gift that everybody should do at least once in their lifetime,” said Bradley.