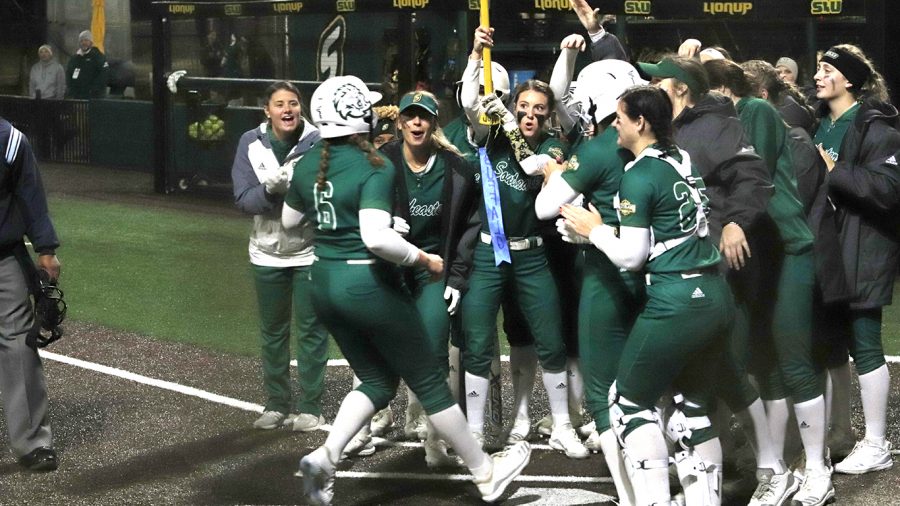 Karlee Kraft, a sophomore pitcher/utility player, is met by her team at home plate after she hit her first home run of the season against Alabama State University.

The Lady Lions softball team concluded the 2020 Lion Classic with five victories, taking the lead in every game of the opening tournament at North Oak Park on Feb. 7-9.

On day two of the Lion Classic, the team closed out game three versus Buffalo after the top of the seventh inning with a final score of 4-0. Game four versus UT Martin ran into nine innings, but the Lady Lions broke the tie and brought home another win, 6-5. Sunday’s game versus Grambling State concluded in yet another mercy rule, Lions taking the win 10-2.

Head softball coach Rick Fremin shared his thoughts on the beginning of the Lady Lions’ season.

“It’s great,” expressed Fremin. “Really excited about the start of the season. You always want to try and get off to a good start. I think we had a good one. Looking forward to the rest of the season.”

Fremin claimed the pitching staff and the team’s defense were key components to their success in the tournament.

“I think we had a balanced attack,” said Fremin. “The pitching staff did well. It was good speed throughout our lineup. We showed some power on Friday and Saturday. For the most part, we took care of the ball defensively.”

The Lady Lions ended every game early except for Saturday’s game against UT Martin, which went into nine innings after matching zeroes in the sixth and seventh. Fremin elaborated on his coaching tactics for whenever the game reached that point.

“They gotta understand, in ITB, when we’re in the International Tie Breaker, that we’re trying to keep that runner from scoring,” explained Fremin. “There’s not pressure because we get that last at-bat. You’re just trying to calm their nerves, put them in a situation to be successful and play the tendencies and look at what the other team’s doing. Majority of the teams are gonna try to bunt that runner over. We just kind of kept trading blows. I was really proud of our team, the way we responded.”

Sophomore utility player Briahna Bennett shared that practice and excitement put the Lady Lions at an advantage going into the tournament.

“We knew we were prepared for everything, and it’s just really exciting to get back out here,” expressed Bennett. “We’ve been working hard all fall and when we came back from winter break.”

Junior utility player Madisen Blackford said the team’s aggression helped them get ahead and finish each game with a victory.

“The thing we do best is being aggressive,” claimed Blackford. “I think our aggressiveness is what helped us win all these games. Pushing the extra bases and scoring those extra runs that we needed to end the games early.”