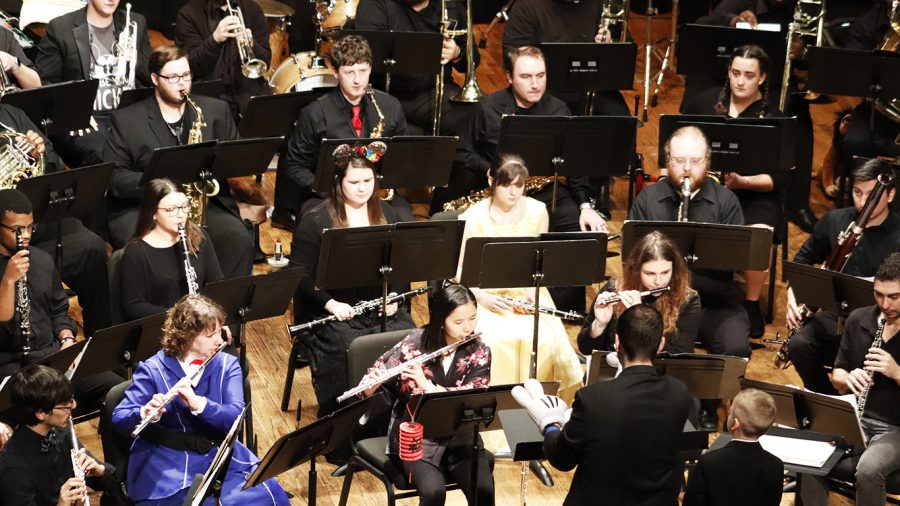 Many students performed in costume, with performers dressing as popular Disney characters such as Belle, Mulan, Stitch and Kylo Ren.

The Wind Symphony put on their annual Disney concert on Feb. 8.

Senior horn player Jarian Jordan explained that the process of preparing a set like this is different than other performances due to the intended audience.

“You know, we can’t really, for older people, dress up in costumes and things,” shared Jordan. “We typically do that, try and make it fun. It’s still professional both ways you go, but for young people, we have to have this look.”

For the piece “Under The Sea” from the film “The Little Mermaid,” elementary student Jackson Hatfield conducted the symphony.

According to Jordan, Hatfield had been watching other concerts that the symphony put on and took a great deal of interest in Director of Bands Derek Stoughton’s role as the conductor.

“He will come to all of our concerts and he would always love to look at Stoughton, and he just would start like subdividing with his hands,” said Jordan. “He’ll do things with his hands in the audience listening to our other concerts, and basically Rhonda was just like, ‘He aspires to you,’ and Stoughton was like, ‘Why not have him conduct a piece?’ He loves to do it.”

Stoughton elaborated on how he managed to find the young guest conductor.

“That was tough,” joked Stoughton. “I had to scour all of the ends of the Earth. I had to do deep, in-depth research from conducting styles and patterns, from all around the world to make sure that we found the perfect person, and it’s just by the luck of Disney that he happened to live here on the Northshore.”

Hatfield’s mother is a pianist with the university, which has helped him see many symphony performances while growing up. Hatfield shared his perspective on how he landed the gig.

“I was looking at the conductor, conducting, and my mom was playing the piano, so my mom told the conductor I was doing that,” shared Hatfield. “So, I conducted.”

Jordan summed up why the moment meant so much to Hatfield.

“Everybody has a dream, like what they want to be, and he’s just like, ‘I want to be that,’” stated Jordan.