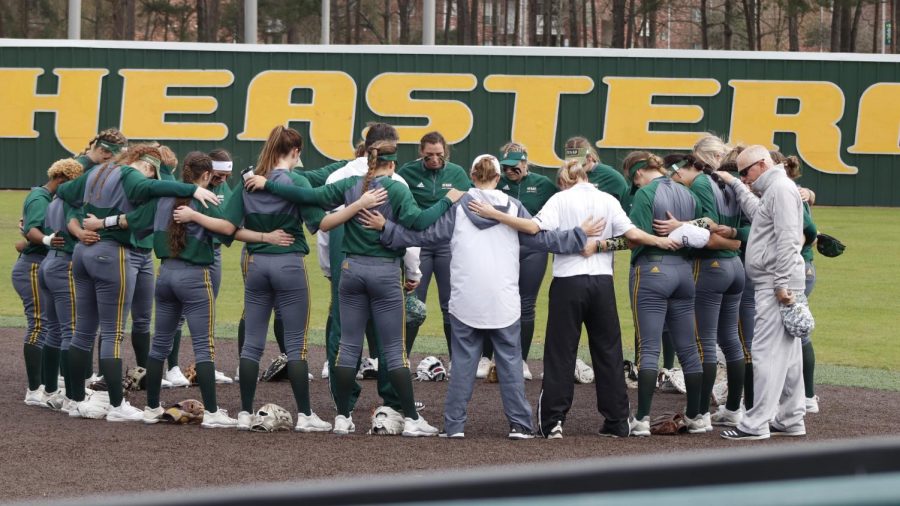 Since the NCAA authorized a dead period for all sports, there will not be a champion in any spring sports.

After the National Collegiate Athletic Association, otherwise known as the NCAA, suspended all spring sports effective immediately through April 15, the university’s athletic programs had to make drastic changes.

The NCAA authorized a dead period for all sports, spanning across all three divisions. This is the first time in the history of the NCAA that there will not be a champion in any spring sports.

Rick Fremin, head coach of softball, shared his thoughts on the recent suspension of the 2020 season due to COVID-19.

“It’s very unfortunate to all the 2020 seniors,” said Fremin. “We had a strong season in the making. We beat a good UL-Lafayette team, we shut out Texas A&M on the road and won the Mardi Gras Mambo Tournament.”

The fifth year head coach shared what advice he gave to the team when the NCAA publicly broke the news.

“I told them that it sucks, but we have to deal with the hand we were dealt,” stated Fremin. “They were all upset and disappointed but it was something that was out of our hand that we couldn’t do anything about.”

In the official dead period of the NCAA, universities are not allowed to do anything regarding athletics, from recruiting to having players at the practice facilities. On Tuesday March 17, the Lady Lions softball team turned in all equipment to the head coach.

Fremin described how he felt when the players had to turn in their equipment.

“It was a very sad day,” stated Fremin. “We gave the seniors their jerseys in their frames and picked up all player equipment.”

Of the three Lady Lions graduating, the only one considering to return for the extra year of eligibility granted by the NCAA is pitcher Tanner Wright.

“Both Alley McDonald and Ali McCoy told me that they were going to graduate and not use the extra year of eligibility,” shared Fremin. “The only one considering returning is Tanner Wright.”

Jason Hayes, head coach of tennis, explained how he felt when he heard the news of the NCAA suspending all spring sports seasons until March 30.

“It was a disappointment,” explained Hayes. “We’ve been working hard and really close to breaking through. But the reality is that this is a dangerous time, and people are losing loved ones and we all need to isolate ourselves and use good judgment.”

Hayes shared how big of an impact COVID-19 will have on recruiting.

“It will have an impact, not sure how big or small,” said Hayes. “But we will continue to search for the best student athletes and bring them here so they can experience this great university.”

With the university women’s tennis team having eight international student-athletes, Hayes shared what effect the canceling of school and the season will have on the players.

“It shouldn’t affect their visas, our international admissions office is fantastic and always on top of things, so if there are any changes they will let us know immediately,” stated Hayes.

The NCAA plans to have a meeting within the upcoming week to discuss how to go forward with all 2020 spring sports and to discuss what steps it will take to keep coaches, student-athletes and fans healthy and entertained.