Protests will only make the virus stronger 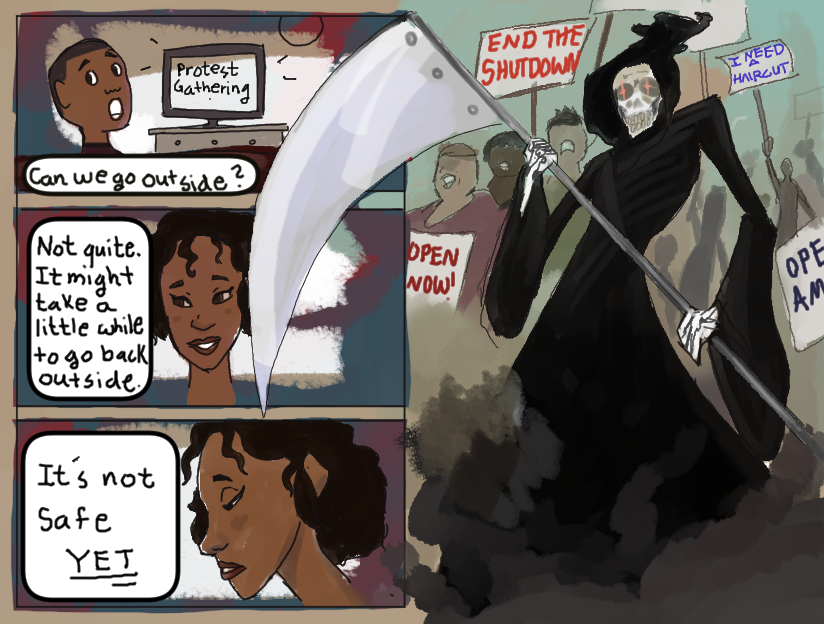 People around the country are now protesting to open the economy back up.

Numerous protesters believe that the government is taking away their freedoms and rights. In reality, they are the ones putting everyone in danger with their selfishness and making state stay-at-home orders expand.

Many of those protesters were not practicing social distancing or wearing masks at all. Ironically, Audrey Whitlock, an admin of a Facebook page that calls for rallies to open North Carolina, tested positive for the coronavirus.

Whitlock elaborated in a Facebook post that she had been “forced to quarantine” by the government, and it was reported that three people in her household also contracted COVID-19. Whitlock revealed that her self-quarantine ended on April 26 and she would be able to attend “Reopen NC” two days later.

I think that is incredibly selfish. During this time, everyone should be looking out for one another. No one should be worried about reopening the country when they are not practicing social distancing and not wearing proper gear while out in public. This could trigger another wave of the virus, cause cases to rise once again and lengthen the stay-at-home order.

Everything would be back to square one and maybe even worse than before.

Nurses across the country have had to counter-protest at rallies that are trying to reopen the nation. While the nurses are standing in their masks, silent and six feet apart, the protesters are standing close together with no masks on, yelling in the nurses’ faces. The nurses are extremely brave in doing this and are setting examples for everyone around the nation. The protesters are proving a point that America is not ready to fully open up again.

Protesters began to turn their anger toward nurses and the healthcare system, assuming that it is their fault that the country is not opening up sooner. This is completely backwards. The protesters should be thanking the doctors and nurses who have been constantly working every day to save lives. A lot of healthcare workers have not seen their families in weeks.

Think about this before you go out and break the stay-at-home orders by protesting; do you want your family to be safe? Just because you are bored at home and missing your job does not mean it is okay for you to go out and cry about it.

Just because the curve may seem like it is flattening does not mean that it is over. There are still many sick people out there and stay-at-home orders are still in effect. If you could just hold out for a few more weeks, maybe you would get your wish.

You are putting your life in danger when you go out and protest. This virus does not discriminate against anyone. If you were at home or in the hospital sick, you would feel differently about it. Your jobs are replaceable, however, you are not.