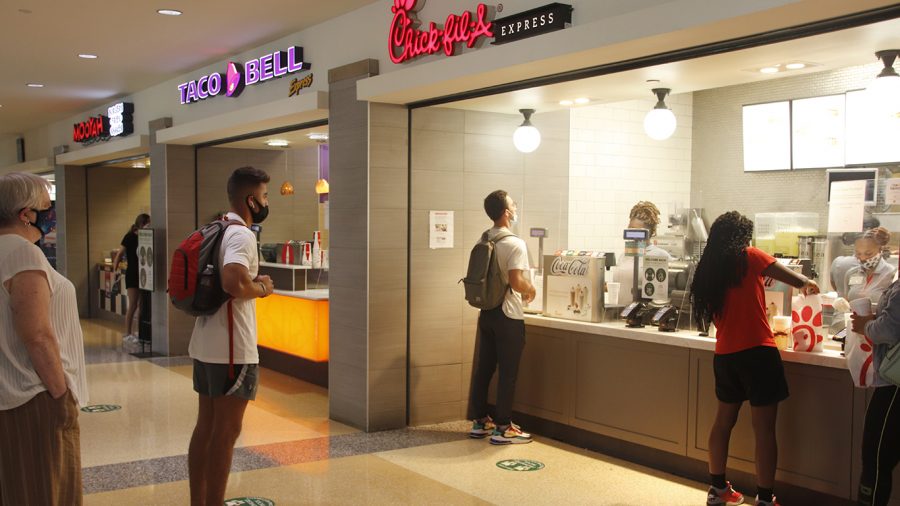 The Mane Dish and the Ascension Market are open for select hours for residents that remain on campus for the week of Aug. 24-30. However, the Lion's Den Food Court at the Student Union and other dining locations on campus will be closed for the week.

On Aug. 23, the university encouraged all residents capable of doing so to head home for the week in the wake of the hurricane warnings.

Many university students chose to move out of on-campus housing in response to campus closure and class cancellations, but some remained in their dorms.

Bradley Miller, a sophomore computer science major, is a resident of Ascension Hall. He decided to continue his on-campus residence this week while others have evacuated.

Miller commented on his food preparations and options on campus since dining hours were altered after the announcement of school closure for the week.

“I have been eating in my dorm since I was able to stock up on food from the Ascension Market,” said Miller. “The Mane Dish was open yesterday for breakfast/takeout.”

The Ascension Market will be open Saturday, Aug. 29 from 11 a.m. – 7 p.m. and on Sunday, Aug. 30 from 5 p.m. to midnight. All other campus dining locations will remain closed for the week.

Miller mentioned the virtual communications he has received from the university regarding last-minute changes due to the storms.

“A bit more physical interaction would have been nice, but ultimately I think that if something serious occurred with the hurricanes, that more contact would have been established,” expressed Miller. “Right now, with Marco’s strength dwindling and Laura’s westward movement, it may just have not warranted as much interaction.”

Will Neely, a sophomore industrial technology major, resides in Tangipahoa Hall. He feels residents have been accommodated well, though that classes should not have been fully canceled.

“I do think SLU has handled it well,” shared Neely. “However, LSU isn’t even closed down, so I think instead of canceling all classes, we should have just shifted to online format in order to not waste a whole week.”

Gabriella Coney, a sophomore biological sciences major, is the first-floor resident assistant for Washington Hall. She described the role resident assistants hold in accommodating the students that remained on campus after the storm warnings.

“RAs have just been instructed to keep tabs on our residents and be on call longer than usual,” said Coney.

“We’ve done rounds and sent out an intent form to keep track of who plans to stay on campus,” stated James.

James explained that University Housing and resident assistants are working together to make sure residents are accommodated.

“Housing is encouraging residents who have the ability to, to head home, and those who are staying on campus have been accounted for and the proper accommodations are being made for all students staying during the storms,” explained James.