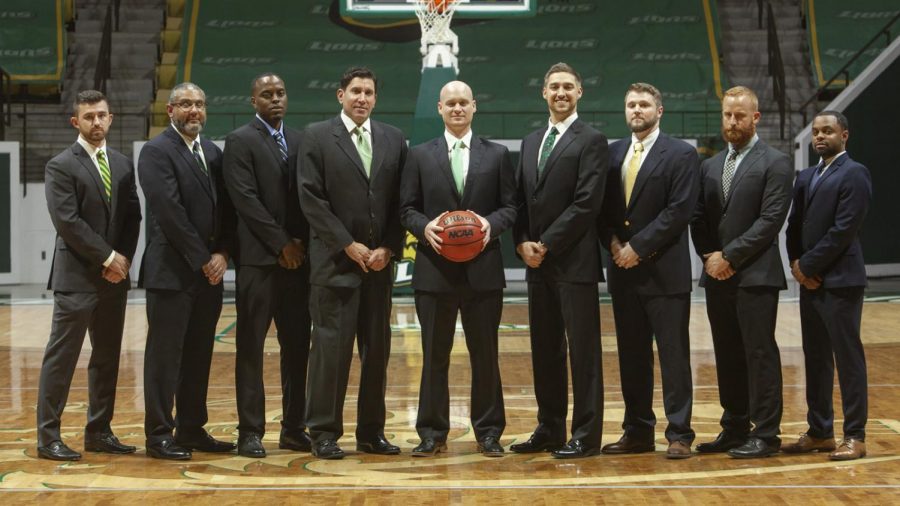 Mark Lieberman, associate head coach for men’s basketball, arrived at the university in the fall of 2019 shortly after David Kiefer was promoted to head coach.

Lieberman, a New York City native, has been around the country serving different roles for various basketball teams.

The Florida International University alumni shared where he got his love for basketball.

“As a kid growing up, I always had a love of the game,” shared Lieberman. “I was really small when I was little, but I grew up watching the old Los Angeles Lakers, Philadelphia Seventy-Sixers and a few other teams. I just grew up to love the game. I just had a fascination for the game and grew to love it.”

Lieberman explained that he did not think coaching basketball would be his career path.

“I enrolled in college and was a communications and graphic designs major, but a friend of mine from college offered me an assistant coaching job for a junior varsity position at Western High School,” explained Lieberman. “Once I stepped in the gym and started coaching at the age of 23, I never decided to look back.”

Before arriving to coach the green and gold, Lieberman coached alongside college basketball legend Rick Patino at University of Louisville.

“Coach Patino taught me a lot about the game of basketball, including how to get the absolute most out of someone when that player even thinks they can’t go anymore,” explained Lieberman. “Coach Patino also taught me a lot of defensive concepts. I also learned how important conditioning is for players. His players are always in shape towards the end of the game.”

While coaching at Louisville, Lieberman made a final four appearance in the 2011-12 season. Lieberman talked about the experience and knowledge he gained from that season.

“We lost our last game at home on senior night to South Florida,”  said Lieberman. “To sit here and tell you that we were a final four caliber team, we were talented but not as talented as other teams in the tournament. We just kind of hit lightning in a bottle and the coaching staff had great chemistry with the players. We beat Cincinnati in our conference tournament and went from there.”

Kiefer and Lieberman’s history dates back almost 20 years, with both of them coaching the Florida Rams, a travel basketball team.

“Kiefer was one of our younger coaches, and we had a great rapport,” said Lieberman. “When the job opened up down here, I was living in Kentucky at the time. He called me about coming aboard, and I jumped at the opportunity.”

Lieberman shared what he hopes the Lions can do in the upcoming season.

“I think we have a really good group this season,” said Lieberman. “We brought in a good group to the team. Coach Kiefer expressed that we need to have a tough identity this season and out-muscle a lot of teams. I think our fans and the student body will be really pleased with what we bring to the table this season, and hopefully they will be able to watch the games live this season.”

The men’s basketball team is currently waiting for the Southland Conference to make the 2020-21 schedule, as the conference announced in early September that a 2020-21 season will occur.