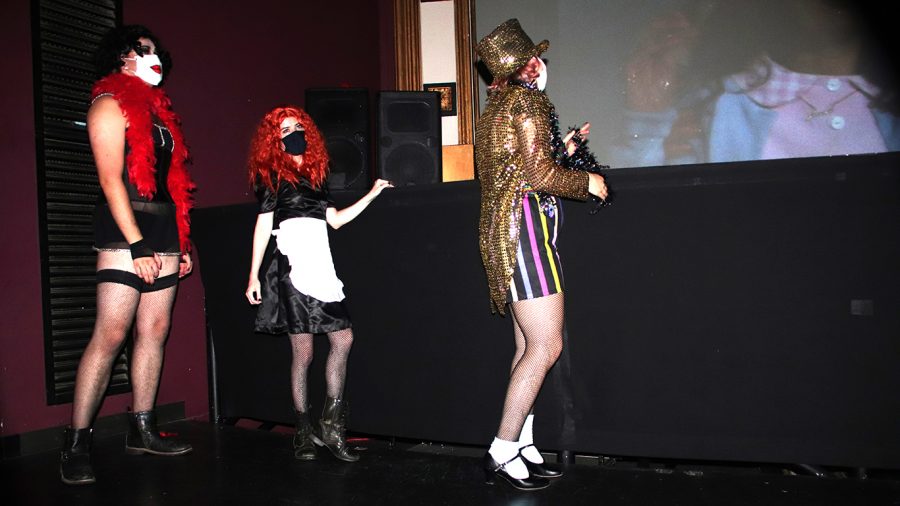 Members of the shadow cast acted out certain scenes from the show for the audience.

The Columbia Theatre for the Performing Arts screened “The Rocky Horror Picture Show,” featuring a shadow cast directed by Joe Burns, a professor from the Department of Communication and Media Studies.

The show premiered at the Columbia on Oct. 8. The Oct. 9 screening was moved to Oct. 16 due to Hurricane Delta. General admission tickets were sold online for $15, and bags filled with items to throw during the screening were sold for an additional $5.

“The Rocky Horror Picture Show” originally premiered in 1973 as a staged musical production, and a movie of the same title was released two years later.

As part of the show’s tradition, the audience throws props during certain points in the show. VIP bags were available for purchase to encourage audience participation.

Burns shared that he used to see performances of the show when he was a student.

“The Rocky Horror Show is an experience that I advise everyone to see if they can,” expressed Burns. “Before I got to college, when I had more time on my hands, I used to go to the theater almost every night to see it.”

Burns grew up with Jim Winter, artistic director of the Columbia Theatre. They would go see the show as often as they could in their town, so it was almost instinct to put the show on the big screen this Halloween season at the Columbia.

Winter shared that they sold all 216 VIP tickets a week before the show.

The bags that were sold to audience members to participate in the show were filled with gloves, confetti poppers, toilet paper and more.

Audience members were also encouraged to dress up as any character from the movie, dance to all the dance numbers and shout out any lines that they wanted throughout the show.

While the show does contain some mature content, Burns shared that it can still be enjoyable for those who choose to participate.

“The show is just all about participating and having fun,” said Burns. “It can be a little inappropriate in some scenes, but nothing that bad. You just should be prepared to come with an open mind.”

The theatre asked students from the university’s theatre program to dress up and attend the show as the shadow cast. These students dressed as a chosen character from the movie and acted out some of the scenes in front of the stage. They interacted with the audience and reminded them of when to throw certain props.

Although there were no rehearsals or casting calls, the shadow cast attended meetings with Winter and Burns to discuss the layout of the show.

Shelby Grantham, a sophomore middle school education major, admits that even though she is not a theatre student, she has always wanted to be a participant in the shadow cast for “The Rocky Horror Picture Show.”

“I wanted to be a part of Rocky Horror because I have been in love with it ever since high school,” shared Grantham. “I went to a strict private school growing up, so my mom would take me and tell me I couldn’t tell anyone. It was like our little secret night. After she started taking me, I began to take friends and we have been going every year.”

Amy Schneida, a junior biology major, is another fan that said being in the shadow cast for “The Rocky Horror Picture Show” had been on her bucket list for a while.

“The movie is such a cult classic, and a great celebration of everything strange and bizarre,” expressed Schneida. “It’s perfect for a spooky season. I was really excited to dress up and dance and have fun with the rest of the cast and the audience.”