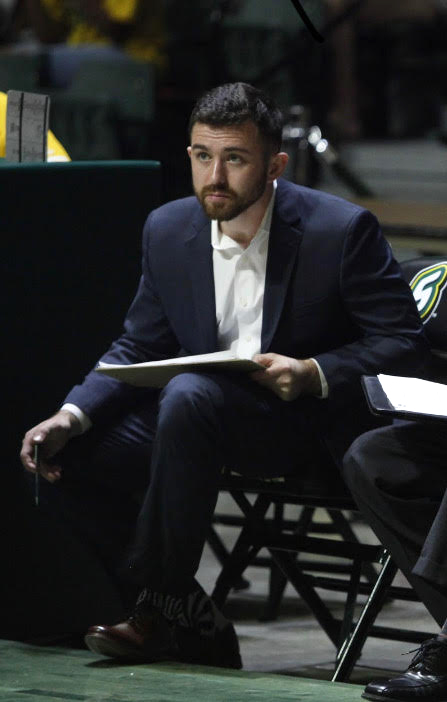 Riley Conroy was coached in college at Tulane University by former NBA Coach of the Year Mike Dunleavy Sr. The Tulane alumnus is currently obtaining a MBA in Sports Administration from Florida Atlantic University.

After serving one season as the men’s basketball director operations and recruiting coordinator, Riley Conroy has been promoted to assistant head coach.

Conroy was promoted from director of operations and recruiting coordinator over the off-season. A notable recruit that Conroy signed over the offseason was Jamon Kemp, the son of six-time NBA All-Star Shawn Kemp.

The Tulane alumnus spoke about how it felt to be coached by his father in his freshman and sophomore season.

“I learned a lot from my dad, actually, and we grew to be even closer than we ever were,” said Conroy. “At first, we were like any father and son with just a normal relationship, but we grew closer when he became my head coach. At first, it was weird to notice the difference between head coach and Dad, but I got used to it after a while.”

Conroy shared how his knowledge of basketball grew even more when Dunleavy Sr. became his head coach.

“Coach Dunleavy was an amazing coach for me,” expressed Conroy. “I learned a lot about defensive schemes as a plate under Coach Dunleavy. I also learned how important it is to watch film on other teams and how to dissect game film.”

Following his career as a Green Wave, Conroy took his first coaching job at Sunrise Academy in Wichita, Kans., a school where basketball players developed their skills post high school.

“Sunrise was definitely a unique opportunity for me,” claimed Conroy. “It was a school where you were one-on-one with players all the time. I even lived with a few guys and learned a lot about coaching from them. Those guys are off doing amazing things now, and I loved every second of coaching in Kansas.”

With no ties to the university, Conroy explained how he found out about the coaching opportunity for the Lions.

“My dad found out about the opportunity from his assistant at Minnesota University,” explained Conroy. “He let me know about it while I was in Kansas, and I thought that it was a no-brainer because Louisiana is home to me. I applied and got the job.”

Conroy shared how he was promoted to associate head coach last month.

“Coach Kiefer called me into his office and let me know about the opening,” said Conroy. “He said that I would be great in this job role and that they could definitely see me doing this as a career. I think I can make this a career as well.”

Conroy shared what the Lion’s goals are for the delayed 2020-21 season.

“For us, it’s going to all be about handling adversity. This season especially, we will be faced with many tests,” shared Conroy. “The success or failure of our team is going to based on how we respond to adversity. With COVID-19, our travel plans may change, somebody might test positive, game times may change and injuries may occur. It’s going to come down to how well we respond to those situations. So as far as goals, I just want our team to become masters at handling the unknown.”