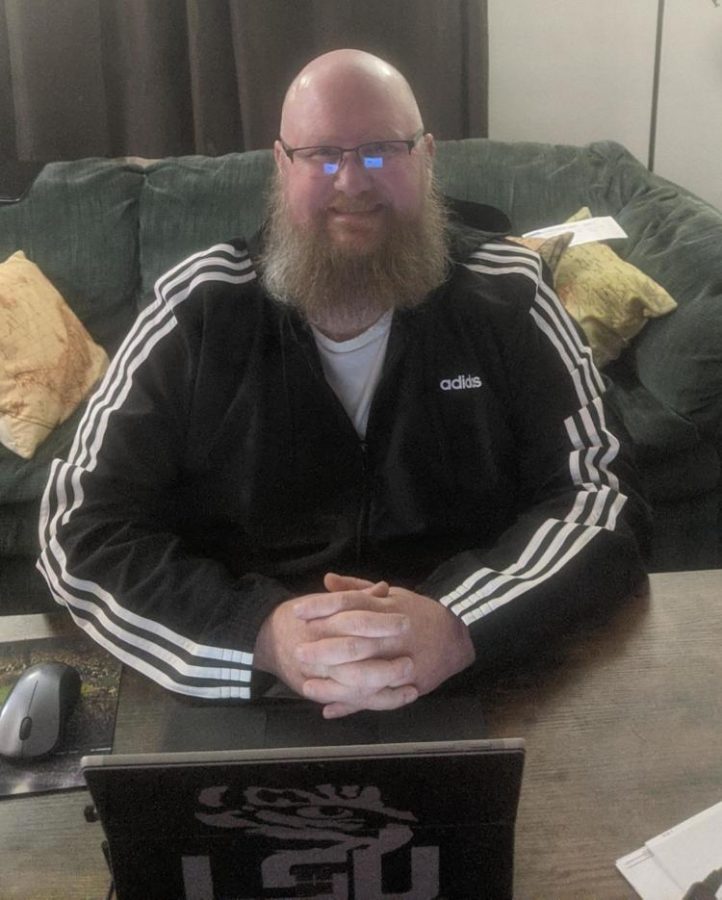 Allen Savant is due to graduate in May. He encourages others to pursue an education no matter what age.

1996 was an important year for former university student Allen Savant. It was the year he dropped out and moved to Idaho.

Savant lived in the now-demolished Holloway-Smith dorms on campus from 1994 to 1996.

Many wondered why he decided to move out to Idaho instead of completing his degree at the university. Savant explained that he wanted to start a family, and Idaho was the best place to do it, given that his wife at the time had family there.

“I dropped out to raise a family. My wife, at the time, wanted to move to Idaho because her grandmother lives there, so we moved,” Savant said.

Savant was not a regular student at the university. He was also in the Phi Mu Alpha Sinfonia Music Fraternity.

He said, “I was a vocal performance major. If I recall, we helped and were asked to be in the school play Pirates of Penzance. It was either ‘94 or ‘95 when I did it.”

Savant is no longer pursuing a vocal performance degree at Idaho State. Instead, he is pursuing two certificates.

“One in training, the other in leadership and a bachelor’s degree of Science in Education. It’s called OLP: Organizational and Learning Program, and the degree is called Workplace Training and Leadership,” explained Savant.

Savant made the decision to change his major because he found the vocal performance program very demanding. He believes that his current degree gives him more opportunities.

He also hopes to be accepted into the Instructional Design and Technology master’s degree program.

“I think, with the way the world is right now, this is gonna be in high demand since corporations, education and everything else that was done in person is now online. We are gonna need someone designing training courses online and other types of online learning,” he noted.

Savant decided to take a break because he felt he did not have enough time between his full-time job and night courses.

He explained, “When I declared this as my major, all of these core subjects were taught online through Idaho State University’s Moodle page. This was my third attempt at getting my degree. After my divorce in 2000, I started back and had to drop out because working full-time, going to school part-time and raising kids was little too much. When my youngest graduated high school in 2017, that’s when I started back in school while still working full-time.”

Savant wants to thank his “mawmaw” for all of her help in getting him settled in college, as well as his good friend Sue Burke Bourgeois who helps keep him out of trouble.

He said, “One thing, if you could, is mention two people for me: my mawmaw Peggy Wallace who helped me move up to college and get settled in, and a really good friend who I still keep in touch with. She was my RA in the dorms, and she kept me out of trouble: Sue Burke Bourgeois. She was going to plan on flying up to watch me graduate, but with the virus, that ended that trip.”

Savant revealed that he misses his family and friends as well as Louisiana’s seafood.

“I miss my family and friends, as would anyone living over 2000 miles away. “I’d have to say the biggest thing I miss the most is the food — great seafood and home Southern restaurants. Up here in Idaho, they have meat and potatoes, and it’s expensive to get fresh seafood here. I’m just glad I know how to cook it all. I had two king cakes shipped up here this year from Joe Gambino’s, and I gave it to a lot of my coworkers and my neighbors, and they loved it, so I still do at times get things shipped up,” he concluded.