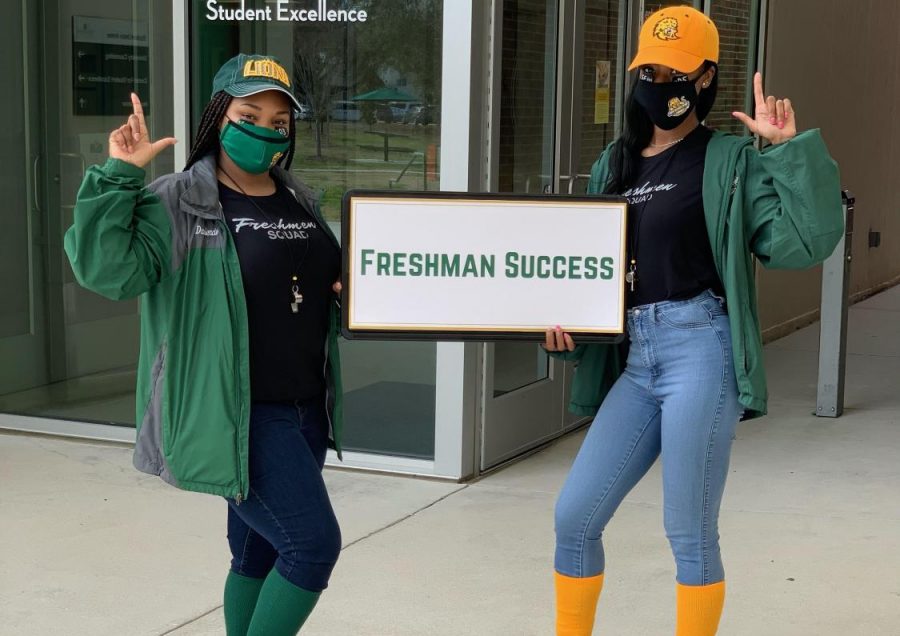 This past week, what started out as a class activity turned into what two professors now call the “Freshman Olympics.”

Both Darlencia Avant and Taneshia Drake are SE 101 professors that chose a different route to help their freshmen learn how to deal with time management.

The two wanted to collaborate on an activity that they felt would get their students charged up to be a Lion. So, rather than sitting through a lecture on ways to fight procrastination and time management during their first year at the university, the professors created a scavenger hunt for their classes.

“We officially named the scavenger hunt ‘Freshman Olympics’ because our classes were kept split to make two teams in order to compete against one another,” said Drake.

Drake’s class was gold, and Avant’s was green.

“We teach SE 101-Freshman Success and did a topic elaboration. We wanted to get the students moving around and up. We did a scavenger hunt activity to see how well they could prioritize their time and learn different things around campus. We followed all COVID guidelines during the activity,” Drake said.

The teachers worked together to help their students gain knowledge on different places on campus.

They both teach SE 101 at the same time this semester and came up with the idea together.

“We actually did a similar activity again last semester, but it was hybrid, so it was more difficult. But this year, the class is only face-to-face for both of us. We wanted to give our students an opportunity to learn more about campus because a lot of our students didn’t get an orientation or to tour the campus. So, we wanted that experience for them as freshmen and for them to learn some time management skills and be ready to better delegate their tasks this semester,” Drake said.

In order to start the activity, they first reminded the students of the COVID-19 policies and social distancing rules that the university has in place. Then, they let each class give the other six locations on campus that they had to walk to in order to complete all the tasks.

“Each location had a QR code that they had to scan which prompted them to complete some type of task before they moved on to the next. So, for example, at Strawberry Stadium, they had to send a picture to us imitating their best football move. Whoever finished all six locations won the scavenger hunt,” Drake said.

They threw in a location that turned out to be blank, with no tasks. This was to show how there are things throughout everyone’s day that distracts them for a few minutes from their original tasks and ends up taking extra time.

Avant said it took them about three days to finalize and prep for the activity before the big day, but the activity itself only took a few minutes.

“We started class at 9:30 sharp to remind them of the COVID regulations and discuss campus maps they could use while during the scavenger hunt. They started around 9:50 and finished at about 10:15,” she said.

Both professors were very satisfied with the outcome, even Avant, who says her team ended up losing.

“Afterwards, I talked to the class, and one student did say it’s something they believe freshman can benefit from and help with time management a lot. It really was different than listening to a lecture versus actually going outside and doing an activity that they learned a lot from,” she said.

Both professors and students claimed to have learned a lot and enjoyed themselves.