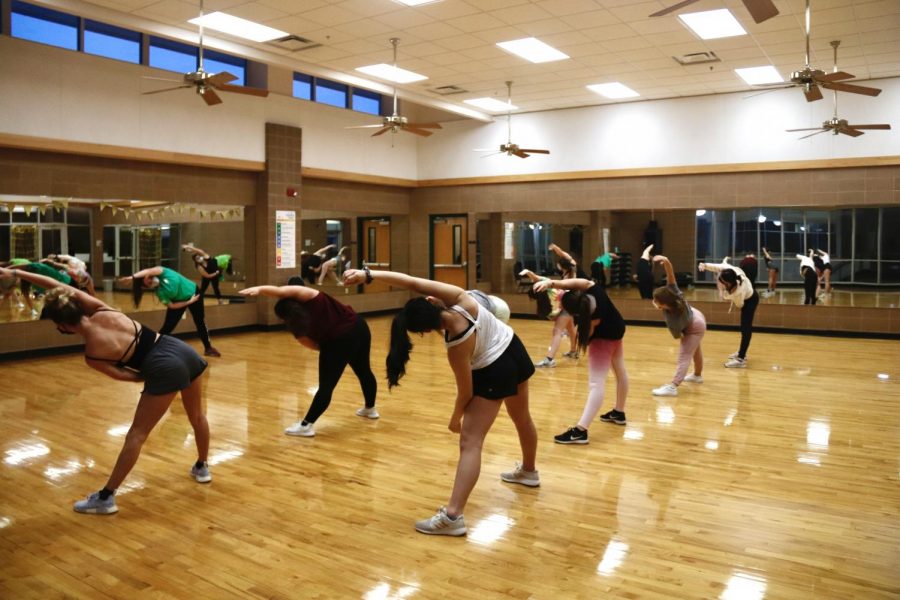 Guests stretch and exercise at the Mardi Gras Dance Party in Room 228 at the REC, hosted by dance fitness instructor Catherine Brasher, on Wednesday, Feb. 10 from 5:30-6:20 p.m.

The class was hosted by dance fitness instructor Catherine Brasher, senior marketing major, and had a 20-person capacity limit. Those who wished to attend registered at IMLeagues.com and were encouraged to come dressed in Mardi Gras or Southeastern colors.

Brasher hosts dance fitness classes Mondays and Wednesdays at 5:30 at the REC. Registration is through IMLeagues.com and can be found on the REC’s webpage.

Brasher received her Zumba certification in 2018 and has been teaching dance fitness classes at the REC since then. She plans her events and the REC helps her with promotion.

“When I was a freshman, they had hip-hop fitness, they had all kinds of dance stuff, and a couple years after that, they graduated and I was like ‘I want to bring it back,’ so I kind of did it on my own,” she said.

Around this time last year, Brasher said she noticed how other groups had themed fitness classes, and she wanted to try and plan something similar.

She said, “I decided it was time to try and plan one of my own, and the one holiday that I noticed Southeastern didn’t have much going on was Mardi Gras. We had to downgrade a lot this year as far as participants, but it’s always been a blast to just let loose and let the good times roll.”

“I saw it on the REC Instagram page, and I thought it would be cool and something to do,” Rahman said.

Amber Rahman, a sophomore general studies major, said they both enjoyed the class.