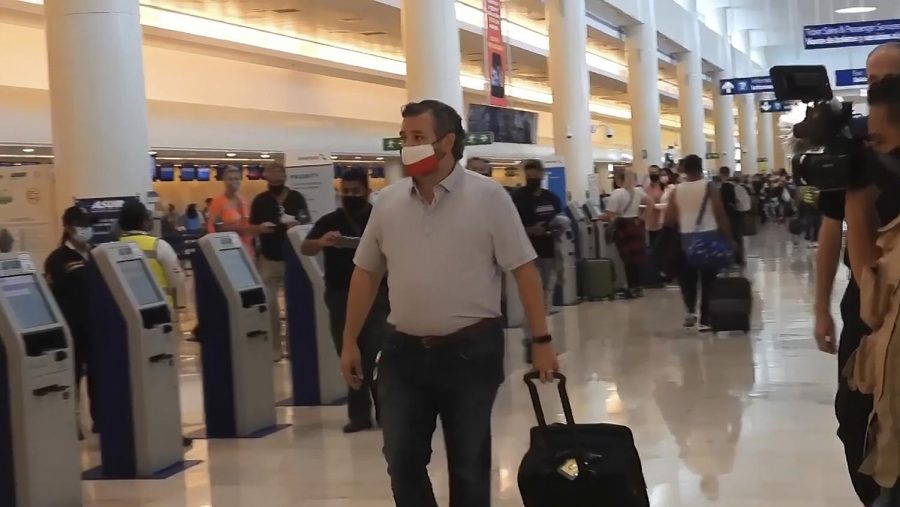 In this image from video, Sen. Ted Cruz, R-Texas, walks to check in for his flight back to the U.S., at Cancun International Airport in Cancun, Mexico, Thursday, Feb. 18, 2021.

Over the past week, U.S. Sen. Ted Cruz, R-Texas, took a family trip to Cancun, Mexico, and has received a lot of hate from the public for doing so during a historic winter storm in his home state.

The Texas senator was caught leaving on Wednesday, Feb. 17, and then the heat from both sides of the political spectrum commenced. Social media backlash came after most of Texas was out of power during the hard freeze.

When asked about the situation, Cruz claimed, “I was just trying to be a good dad.” Cruz later came out and admitted it was a mistake and stated that he has a “big responsibility” in Texas and should have had second thoughts about the situation.

In my eyes, I agree with Cruz in that being there for his home state was a big responsibility, and he should have had second thoughts on the trip, but on the other hand, I don’t have much of a problem with it at all.

Putting emotions and feelings to the side and looking at the facts, Cruz was evacuating the state because of the bad weather and conditions that were on the way, but most people did not see that. People saw that he was leaving Texas citizens for dead and heading on a beach trip. However, as a man, one of your many responsibilities is to provide and protect for your family, and Cruz was also ultimately doing that.

Did it look good on his behalf that he was going to Cancun in particular? No, but whose place is it to judge where someone evacuates to? During Hurricane Katrina, my family and I evacuated to Destin, Fla. — should my family be persecuted for doing the same? No, not at all. My mom and dad were doing the one thing that every parent should do: protecting their family. I would have done the same thing if I was in Cruz’s situation.

Although I do not oppose Cruz’s decision, I see why the people of Texas were upset with their senator. He should not have left the state during the historic winter storm. On the other hand, if he would have stayed in Texas, what could he have done to stop the storm or make things better?

In my eyes, it is the same fashion as a hurricane: you know bad weather is coming, so leave to a safer area. Cruz ultimately flew back to Texas the following day on Thursday where he apologized. Everyone makes mistakes, so why crucify Cruz for this mistake when he came back and fixed things?

At the end of the day it did not look particularly well on Cruz to skip town while his state was suffering, but he was doing as every father should do: protecting his family.