SGA and MISA to honor Black History Month with exhibition 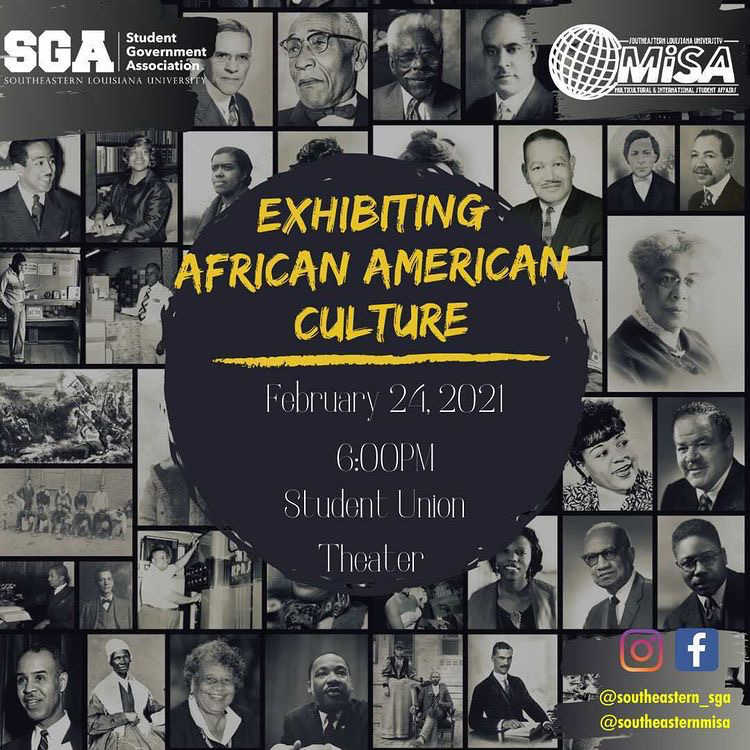 Courtesy of SGA and MISA

Students, faculty and staff are invited to attend "Exhibiting African American Culture," which will showcase African American visual and performance arts. Through this collaboration between SGA and MISA, the exhibition will allow students to widen their knowledge and show their appreciation for Black history.

In honor of the 51st Black History Month, students and faculty at the university are invited to participate in an artistic exhibit of African American Culture.

This month, the Office of Multicultural and International Student Affairs and the Student Government Association are collaborating to organize “Exhibiting African American Culture.”

According to Brendan Daigle, SGA coordinator, “Attendees can expect to see visual and performing art created by African Americans and/or with African American culture as the subject matter. There will also be a speaker presenting on the topic.”

Multicultural and International Student Affairs Programming Specialist Kourtni Harris came up with the idea to host the exhibit. She described why she decided to make it a reality.

“I originally came up with the idea, but I was able to fully execute everything with the help of the Student Government Association and Multicultural and International Student Affairs. I wanted to give our students and campus a visual representation of what African American Culture is along with a talent portion and a guest speaker,” Harris said.

The exhibit will feature visual art from students at the university.

“The exhibit will be art from our Southeastern students. The art will be displayed in different forms such as paintings, digital design and sculptures. Everything will be based on African American Culture,” Harris said.

Daigle described who can submit pieces to the exhibition, and how they can submit their pieces.

“African American visual artists or artists who have pieces with African American culture as a focus can contact us if they are interested in having their art featured in the exhibit,” Daigle said.

According to Harris, many people have assisted in creating the exhibit, including Mattie Hawkins, Brendan Daigle, L’Oreal Williams, Darnell Butler and Madi Sunde.

“People should attend the event to gain some knowledge about the many creative contributions of African Americans and to enjoy the art and performance,” Daigle said.

For more details, students can get in touch with SGA and MISA via Instagram (@southeastern_SGA, @southeasternmisa) or via email.