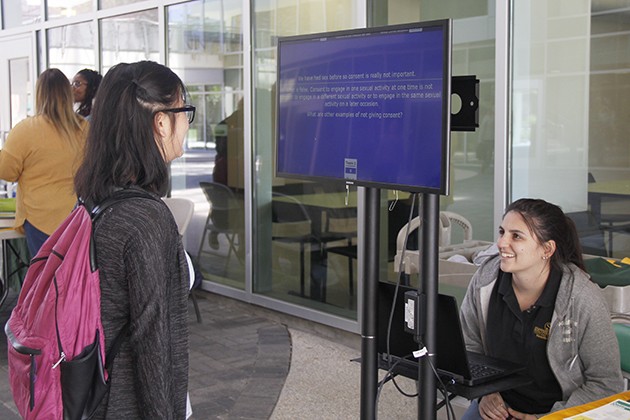 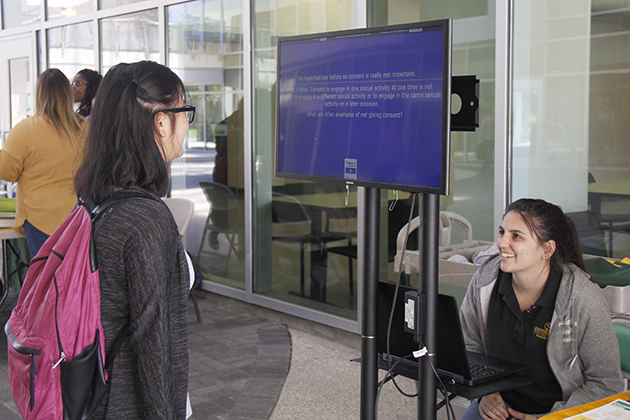 The Campus Assault Response and Education Team put up tables in the Student Union Breezeway on Monday, April 16 from 11 a.m. to 1 p.m. for Sexual Assault Awareness Month and passed out information regarding sexual assault.

The University Counseling Center provided flyers to the students and had color-coded Easter eggs, which students could choose to answer questions to receive candies and stress balls.

Counselor Intern at the UCC Elizabeth Armstrong explained that the tables were put up to promote counseling in the university.

“We are here to promote the value of receiving counseling when you’ve been connected to a sexual assault in some kind of way,” said Armstrong.

The Office of Student Advocacy and Accountability also had a stall with members of the office passing out flyers about sexual assault.

“We have scenario-based questions that determine whether or not individuals have been giving consent, true, false questions about sexual assault and consent,” said Armstrong. “So, students are given the opportunity to not only answer the questions, but talk about the answers, to talk about why it’s true, why it’s false, or in the scenarios about consent, why the person may or may not have consent and what can be done during such scenarios.”

The University Health Center provided free T-shirts to students participating in the quiz to answer questions on information, consent and statistics about sexual assault.

Graduate Assistant at the University Health Center Kirsten Dantin talked about the events that will be organized during the month of April for SAAM. The CARE team will also have tables at “Strawberry Jubilee.”

The last event that will be organized to recognize the month will be the National Denim Day display on April 25.

“The last event that’s happening is the Denim Day, and that’s on the 25th,” said Dantin. “That was a case that was heard by the court, and the perpetrator said that the victim was wearing really tight jeans and that’s why he committed the sexual assault on her. So, it was kind of her fault on wearing the jeans. So, in commemorationof her and that case, it’s Denim Day. So, people are asked to wear blue jeans or denim jackets on that day, and I think we’ll do like a tabling event to create awareness for the Denim Day.”