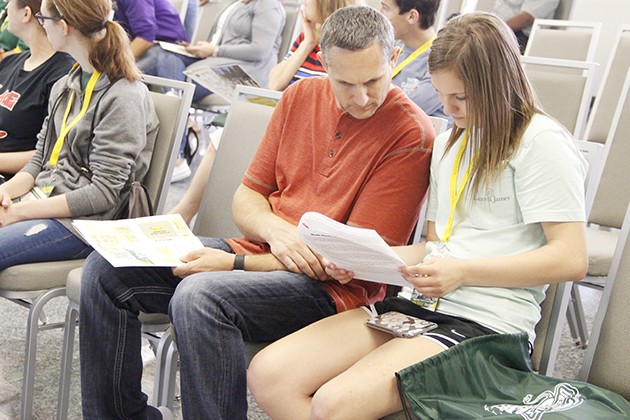 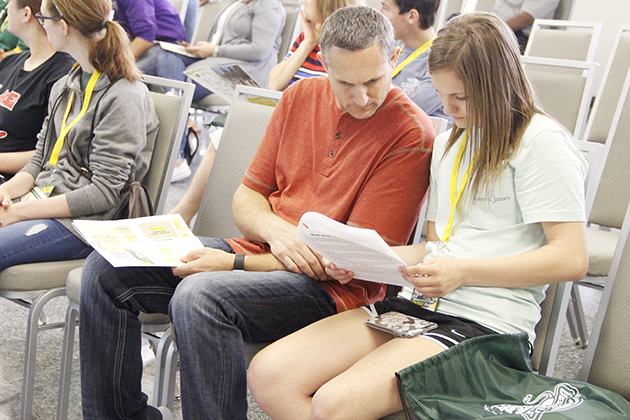 The Office of Admissions organized the "Lion Pride Preview" to let prospective students know about the opportunities the university has to offer. The event saw over 360 students participating to learn about the university. Prakriti Adhikari/The Lion's Roar

Prospective students were welcomed on campus and offered insights to the opportunities the university has to offer.

“Lion Pride Preview” was organized by the Office of Admissions on April 13 from 8:30 a.m. to 2 p.m. at different locations on campus.

After students checked in on the first floor of the War Memorial Student Union, they were welcomed at the Student Union Grand Ballroom. While there were “Academic College Discovery” sessions on different locations on campus, orientation leaders also offered campus tours. During the “Select-A- Sessions,” students and parents were offered sessions like “Paying for College” and “Living on Campus.”

Student at Archbishop Chapelle High School Sydney Acosta is set to join the university the coming fall semester. She plans to major in biological sciences to pave her path in becoming an oral surgeon.

“I signed up for college just to come here,” said Acosta. “I had never seen it before, which was a little risky, but I found it to be really welcoming and that everyone was willing to help you go anywhere. This is really diverse. Everyone comes here. I just find it to be a really awesome place, like home.”

Freshman business administration major and orientation leader Ruhullah Ashiru was happy to have received an opportunity to become a leader. He found prospective students interested by the “Foreign Language Festival,” which happened at the same time in the Student Union Breezeway.

“They have the multicultural event going on now, and students are pretty attracted to that,” said Ashiru. “I see them walking around asking question. So, that’s interesting. I like the fact that we have two events going on right now.”

Senior at St. Amant High School Austin Duhe attended the academic session for the college of arts, humanities and social sciences. He believes that the college size is a perfect fit for him and was happy with the information he obtained.

“I think the ‘Lion Pride Preview’ was very helpful,” said Duhe. “It helped me a lot to decide where I want to go in college, and that’s Southeastern.”

According to Assistant Director of Orientation and Events Amanda Hammonds, over 360 students participated in the event. She believes that the event was successful.

“It was a really great event,” said Hammonds. “Last year for this event this time of the year, we had less students. So, we reached our goal of surpassing last year’s number. We are enjoying that the students make their own day. They get to choose the sessions they want to go to.”

“For ‘Lion Pride Preview,’ we have a lot of students that come that are college shopping,” said Rushing. “So, they don’t really know where they want to go. So, all orientation leaders give tours and point people to the right direction. We are here to answer questions any of the students might have.”

Student at Little Cypress-Mauriceville High School Brandon Dunbar plans to attend the university the coming fall semester. He was impressed with the academic program offered by the university.

“From what I have seen today, I really like what I have seen,” said Dunbar. “I got to visit the engineering technology program. They showed me all the different things they have to offer, all the things that you can do, and all the projects you can work on, and all the opportunities you can get after college. So, that’s the good thing, and I also like the atmosphere here.”