How Salim found an avenue to success 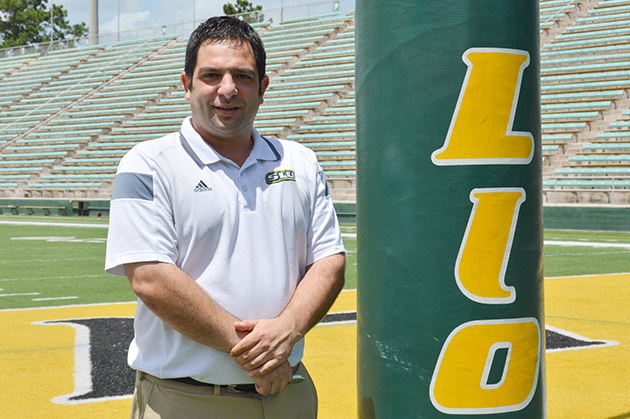 Christopher Salim stands on the football field of Strawberry Stadium. Salim recently earned the position as the assistant director of sports information.

As members of the Chicago Cubs stole bases during televised games, one little boy was glued to the television, eagerly watching with laughter, tears and intense passion.

“I knew at a young age that I wanted to pursue a career in sports,” said Christopher Salim. “I just wasn’t sure of the exact avenue for a long time.”

Salim recently received a position as the assistant director of sports information. He will now be the primary contact for men’s basketball, soccer, track and field, cross country and golf and continue to be the play-by-play radio announcer for the men’s basketball team.

While attending Northwestern State University, Salim began to realize how many angles and paths of success he had access to in life. He earned a degree from the university in 2007 and played baseball there from 2004-2006.

Salim explained, “I knew that if I stayed the course and trusted those around me including the mentors I had at NSU, that no matter what choice I made, I could always know that I was going in the right direction.”

On-the-job training contributed to Salim’s development of an on-air personality that he describes as “comfortable and entertaining” despite the outcome of games. Salim shared the most important lesson he learned as the radio color commentator for Northwestern State University baseball.

“There were a lot of little nuances of broadcasting that came from color commentary,” said Salim. “Most importantly, ‘remember to never speak over the person you are on the air with and to always communicate.’”

Assistant Athletic Director for Sports Information Kemmler Chapple along with Athletics were familiar with Salim’s work as a radio play-by-play announcer for men’s basketball home games during the last season.

When former Assistant Director of Sports Information Michael Kiral left his position at the end of April, Salim expressed interest in beginning a new career at the university.

“A friend of mine from Natchitoches heard about the opening and told me about it,” said Salim. “From there, one thing led to the other, and fortunately, I was able to get my foot in the door. The fact that SLU Athletics has been on such a dramatic incline the past six to eight years, I knew that was something I wanted to be a part of.”

Salim has developed memories broadcasting each sport, making it difficult for him to pick a favorite.

“They all bring an element out of me emotionally that makes the games that much more exciting,” said Salim. “With football, you never know when the big play is going to happen. The build-up for the games is so big that by the time kickoff arrives there is an adrenaline rush for a broadcaster almost the same as a player.”

According to Salim, each sport shows him a different perspective and produces a different reaction as a play-by-play broadcaster.

“Baseball is fun in that it is the sport I’m most knowledgeable with,” said Salim. “I can break down the game for the fans without criticizing players and also have enough down time to entertain the people listening. Basketball may be the most exciting because of the pace. It is non-stop for two hours. The atmosphere is intense from the opening tip off.”

Chapple enters his 15th year at the university and his fifth as sports information director. Although Salim joined the staff at the end of May, Chapple has high hopes for him.

“His experience in both print media and radio made him an ideal candidate,” said Chapple. “Add to that his experience working in our conference, and we’re fortunate to have Chris join our department. He’s become more comfortable in his position as each day goes by and has proven that he will be a great asset to our department.”

Chapple shared that he hopes to instill departmental values such as dependability and hard work during Salim’s training process. Although Salim has not defined specific goals to complete during his tenure at the university, his principles seem to align with those of Chapple.

“As long as I’m doing the job at a high level on a daily basis that I know I’m capable of, and the supporters of this university know that they can rely on me for timely and accurate information, then it’s a job well done,” said Salim.