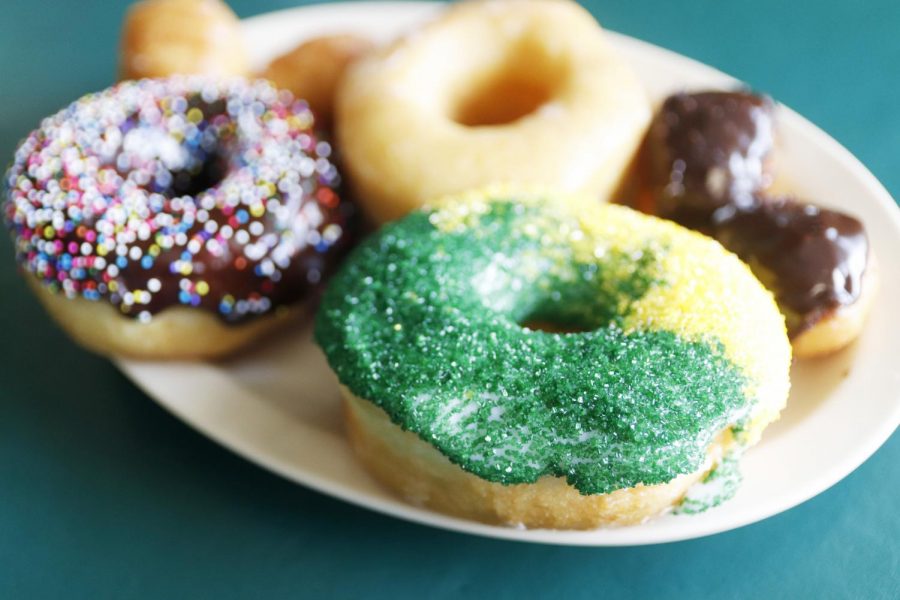 Hammond has eateries offering a variety of foods. When looking to satisfy your sweet tooth, here are some reputed locations around Hammond.

Eddie’s Famous Frozen Custard was founded in December of 2006 by Edward “Eddie” McGhee when he noticed on his travels that the frozen custard shops he saw up north were not popular in the south.

“There were none here,” said McGhee. “I used to travel and would see them all up through the north, east and west. I was tired of being on the road and thought I’d try doing a business that no one had done before.”

In his shop, McGhee advertises custard as being better than ice cream because it is smoother and more flavorful.

“I happen to think we’re the best quality ice cream on the market,” said McGhee. “It has a very good taste. We’re an old building, but we have a good, clean atmosphere. The main thing is it would be a treat because you don’t see frozen custard places a lot. If you enjoy ice cream, you’ll enjoy this.”

Courtyard Cafe opened in October 2017 and has become known for its sweet as well as savory crepes and beverages.

“I love our menu so much, working with Mojo Coffee Roasters of New Orleans and creating our specialty items really brings the magic, but it’s the people that work with me that make courtyard such a special place,” said Rose Wong, barista at Courtyard Cafe. “My fellow baristas are so talented, and they’re always creating new drinks and pouring that gorgeous latte art.”

The cafe is run by Wong and her husband, who were inspired to open a cafe by their fondness of coffee and tea.

“My husband and I are caffeine addicts, and so I think spending time with family and having access to an all manual espresso machine was just too tempting for us,” said Wong. “When you have so much passion for something, you almost have to make it your life, and that’s our Courtyard Cafe.”

Wong feels their establishment appeals to everyone.

“We have something for every type of sweets lover,” said Wong. “Sweet-savory Nutella bacon crepes, condensed milk infused cold brew Costa Rican coffees, and vanilla bean Hawaiian ice are some of my favorites.”

After graduating from the university in 2002, William Hall and his wife, Emily Phillips-Hall, purchased University Donuts in 2010.

“My wife and I had been regulars here, and we bought it from them about two and a half years ago,” said Hall. “He came up while we were eating and said, ‘I have an offer for you.’ The number was right. The timing was right, and I said, ‘Yes.’ So, here we are. For both of us, it was a lifelong dream to own a restaurant. We both worked in the food industry before.”

Hall boasted the difference in taste caused by hand-cutting his donuts and the Southeastern-themed decor of his restaurant.

“Southeastern needed something that coincided with it,” said Hall. “I think University Donuts is perfect for that. It’s a rock’s throw away from the main campus. Our mascot is the lion. One of our best selling donuts is the green and gold SLU Donut. It’s a place for people to come in and just relax. It has that type of down-home cooking, comfort food, laid-back atmosphere.”

The Cocoa Bean Bakery and Cafe opened 18 years ago. It was taken over by current owner and pastry chef Anthony Delpidio in 2007.

“After Katrina happened, being on the south shore, this was my excuse to get to the north shore,” said Delpidio. “There aren’t any hotels or big establishments over on the north shore. Me being a pastry chef, there were no hotels for me to work at or be an executive chef at. So, this was kind of the only thing that popped up.”

Delpidio attended the university for three years before finding his passion for cooking and transferring to Delgado Community College. He chose to become a pastry chef to make it easier to raise a family due to the lack of odd hours. After taking over The Cocoa Bean Bakery and Cafe, he lost the control of his hours but takes pride in the customer service by making the experience more personal for his customers.

Delpidio believes The Cocoa Bean stands out due to its customization and care that goes into the products.

“What I like to think that makes us a little different is what we do,” said Delpidio. “It’s not cookie cutter. We don’t want to offer the same thing you would at a grocery store. Everything is done by hand.”

Another shop that opened less than a year ago is Sweet Rolls. This rolled ice cream shop has boomed in popularity since its opening in December 2017 and is now franchising out to 10 different locations across the south.

The shop known for its viral ice cream videos sells more than rolled ice cream however.

“I would consider us to be a gourmet ice cream shop,” said Guidry. “We not only sell ice cream, but we also sell sweets and treats. You can find cookies, macaroons, scones, cinnamon rolls, cannolis, and we’re about to introduce my favorite, churros. We really have a variety of menu items for not only adults, but for children as well.”

Guidry has found that social media has launched the eatery by spreading word across America and overseas.

“We’ve been working with a marketing company called Anntoine here in Hammond, and they’ve really helped us grow on social media,” said Guidry. “People are excited about our new locations, and they are always asking us, ‘Hey, when are you coming to my area?’”

Guidry has confidence in the product and its ability to do well.