Downfall of the lions in Death Valley 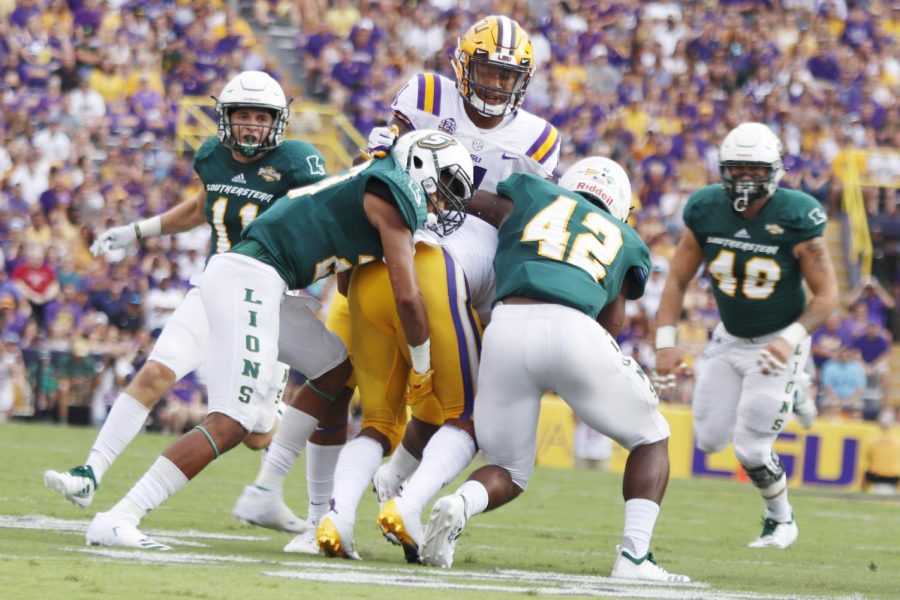 The Lions have an 0-2 record following their loss to LSU. However, the defense only allowed one touchdown in the second half of the game.

The last time the Lions played Louisiana State University in Baton Rouge was in 1949 where they lost 48-7. On Sept. 8, history repeated itself when the Lions lost to the LSU Tigers 31-0.

Frank Scelfo, head coach, listed some of the reasons that contributed to the team’s loss.

“False starts, pre-snap penalties, snapping the ball at the wrong time, dropping balls,” said Scelfo. “If we eliminated the things that we can eliminate and take care of the things that we can take care of, then we would’ve put a much better show out there on the field. That’s not what I plan on when I go out there to play. I don’t care where I’m playing and who I’m playing.”

After making it into the red zone multiple times, Chason Virgil, a junior quarterback, explained the annoyance of facing turnovers each time.

“It’s very frustrating you know, but in the midst of the game, you’ve just got to put your head down and just keep pushing,” said Virgil. “Hopefully, you’re just looking to get in the end zone, but it didn’t happen tonight. We’ve just got to go back to the drawing board and clean up some things, work on our rhythm on offense.”

Although the Lions did not score, there were some improvements from the last game. Scelfo talked about the job well done by the defensive pressure.

“The quarterback was holding the ball for a long time,” said Adeyemi-Berglund. “I know our defense did a great job holding them in coverage.”

On the offensive side, Scelfo complimented the performance of Lorenzo Nunez, a junior quarterback, stating that he adds an “element, sometimes when offensively, we can’t get the pace-running game going.” He explained what skills Nunez contributes to the team.

“When he’s willing to go back there and play quarterback and running back and receiver and do whatever we ask him to do, I think that’s pretty cool,” said Scelfo. “That’s indicative of the majority of the football players on our team.”

“Somebody’s got to make that play, and he did,” said Scelfo. “We didn’t make the play. They made the play, but it all started with the protection of the quarterback and then the throw. So, the percentage isn’t very high on those, but they connected tonight and more power to them.”

Looking past the loss, Scelfo stated that he is ready to prepare the team for the upcoming games.

“We’ll learn from this, we’ll grow from this,” said Scelfo. “We’ll take a look at the film tonight and tomorrow, and we’ll turn the page and get on to Central Arkansas next Saturday.”