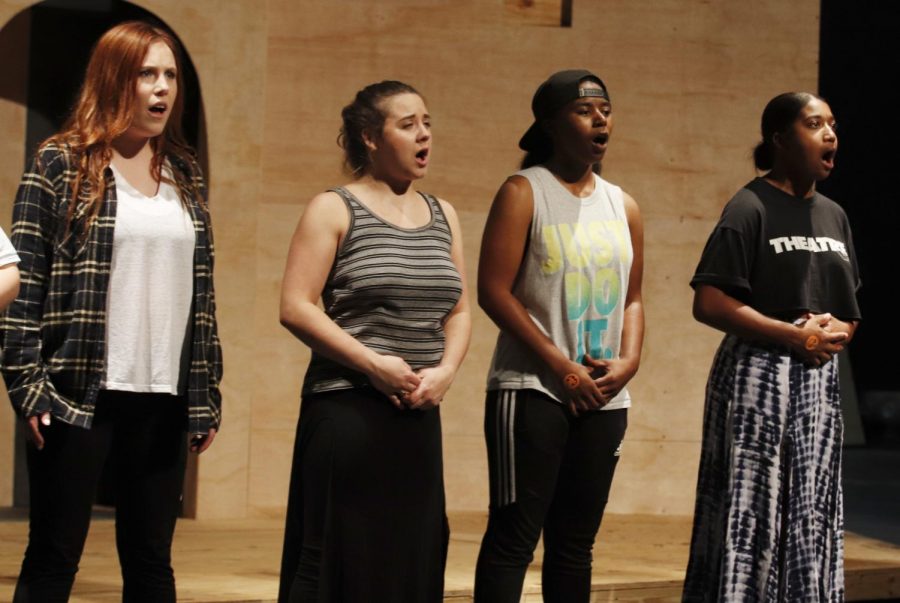 Students rehearse for "Dracula," the theatre program's first play of the season.

The university theatre program is preparing to present the first play of the season. “Dracula” will be performed in the Vonnie Borden Theatre from Tuesday, Sept. 25 to Friday, Sept. 28 at 7:30 p.m.

James “Jim” Winter, associate professor of acting and directing, is excited to produce a scary play.

“Well, there aren’t that many scary plays out there, like genuinely scary plays,” said Winter. “So, it’s exciting to direct and produce a scary play, and we thought, OK, even though it is the end of September, people are getting in the mood for Halloween and the month of October. I think that’s special.”

The actors have been practicing for the play since they were cast on Aug. 16, 2018.

Taylor Bennett, a senior English major, is playing one of the main characters in the play. Bennett shared the challenges she had during the preparation.

“It’s a lot of prep physically,” said Bennett. “I have not done something as physical as this before, and there is an accent challenge in there too. So, that’s also different.”

According to Winter, the play will be presented from a female perspective.

“In the classic story, the women are generally the victims, and that is not the case in this production,” said Winter.

Jordin Jones, a junior art major, is playing one of the brides of Dracula. Jones feels that even though the gender is reversed, it does not bring major changes to the play.

“The only difference is the gender,” said Jones. “It does not change the play at all or even my character. I think it makes the play even better.”

“Dracula” was different for Bennett as she had to understand the character to portray the feelings properly.

Winter shared that he enjoyed writing the adaptation, which is different from what the public would expect.

“It was fun ‘cause I got to take the story I grew up with and sort of turned it into something new and different for me and for our audience,” said Winter. “It’s not the ‘Dracula’ you are used to seeing.”

Colin Ross, a senior art major, feels the play to be the most dramatic among all he has been in. Ross shared why he feels students should see the play.

“This is gonna be a really stunning show I think even just visually,” said Ross. “Our sound designers have put on a lot of work making the audio, the soundscape of the show. So, it’s gonna be a full on experience beyond what I have seen here.”