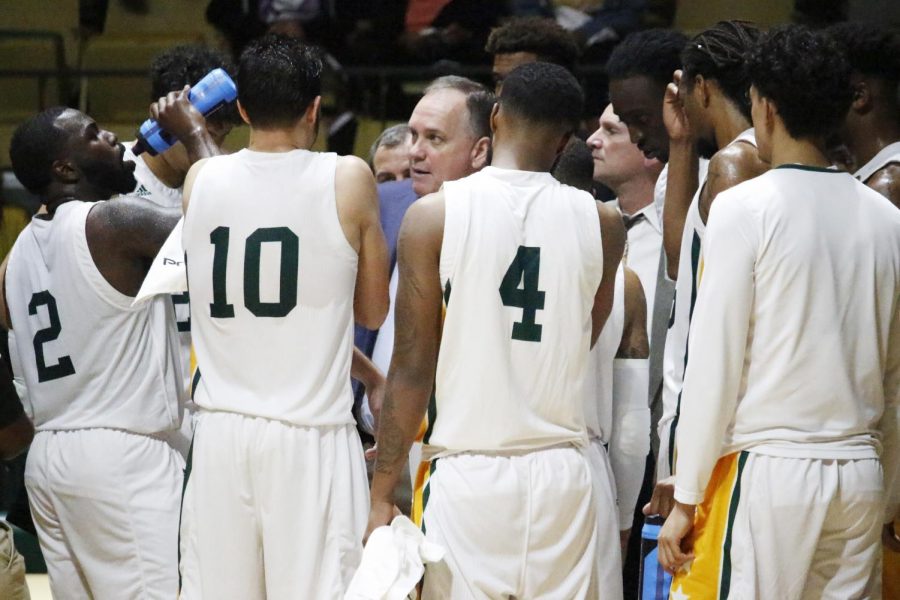 Jay Ladner, head coach of men’s basketball, talks to his players about their game plan. Games include coaches giving their players a pep talk to rally morale and win the match.

When people think of sports, they think of players, wins and losses. Fans also think of coaches, the championship game and the “game winning play.” Although all of these are important to the nature of sports, there are many more pillars to sports.

Pregame speeches vary from being heated up speeches to more tactical strategies and on how to approach the opponent.

Jay Ladner, head coach of men’s basketball, varies his pregame speeches from being motivational to aggressive depending on the need.

“I would say pregame speeches vary,” said Ladner. “It all depends on the state of the team. If I feel like they’re mentally prepared, it will be more low-key and relaxed. If they’re not there mentally or psychologically, it will be more intense and aggressive.”

Not every opponent is the same in sports. Some schools may be more competitive than other schools. Some basketball games are Southland Conference games, and others are against non-conference opponents.

“The Southland Conference opponents are very meaningful for us and decide our conference standings,” said Ladner. “Those are the speeches that I get intense and motivate my boys the most.”

When the university plays division one schools, the tone of the pregame speeches tends to be more tactical because the university is playing on a national scale.

“I don’t let just anyone give the pregame speeches,” said Ladner. “I only allow the team leaders give speeches. Sometimes it changes the other player’s mindset, and it gives them someone else to hear talking.”

Pregame and halftime speeches can change the outcome of a game.

“Many times we’ve been down big,” said Ladner. “I mean big. We’ve come back from a blowout and came back to win the game.”