More than singing and dancing 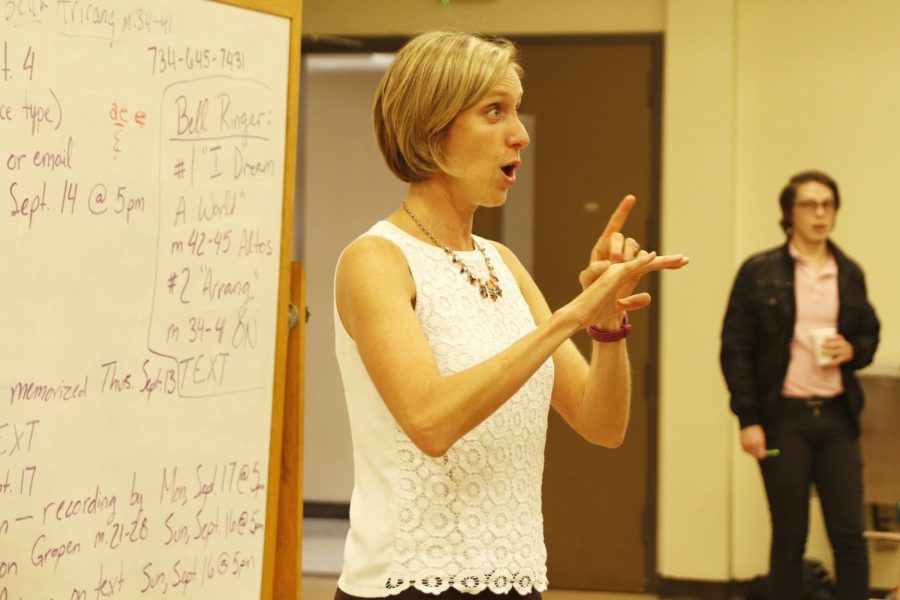 Dr. Alissa Rowe, associate professor of voice, teaches choir to students. The Department of Music and Performing Arts offers opportunities for both music and non-music majors to perform.

The Department of Music and Performing Arts boasts notable alumni like Bill Evans, a jazz pianist and a composer, and many others who hold positions in Symphony orchestra and respectable teaching positions.

“I think the big thing I want the campus community to know about our department is that we have lots of opportunities for non-music majors to participate,” said Wright. “Sometimes I know students are worried that they have to be a music major to be in band or orchestra or music major to be in our dance ensemble.”

Wright elaborated on some of the opportunities that could be available to students who are interested in participating in music, but stopped themselves due to the lack of prior experiences.

“One of the things we really pride ourselves on is having opportunities for all students,” said Wright. “For some, even those without any musical experience, we have some vocal choral ensembles available to them. Our instrumental ensembles do require some training in an instrument but again are open to non-majors.”

Jody Bennett, a junior music major, resonated with Wright that the department is more than just singing.

“The department as a whole is really outstanding,” said Bennett. “I feel like it’s the most under estimated departments on campus. Not a lot of people know about the department of music. I always say that it’s more to the department of music than singing. We are actually very unique in that every thing that we do we do for others. So, when we are singing, we are not singing for us but we are singing to emote something that an artist, a composer has had. A message was written in there, which we interpret and share with that message with the people.”

Bennett also feels the department is underfunded, and more funding should be provided as music majors are “the representatives of the university.”

According to the university website, the department has over 200 students from across the country, and over 35 faculty members striving to train students to excel. The department offers minors in music and choreography and contemporary dance performance. The general studies program offers a concentration in arts and humanities, a minor in dance, and graduate degrees in conducting, performance and theory are also offered.

“The Bill Evans Jazz Festival” is one of the biggest events put on by the department. The festival is organized on an annual basis to pay homage to the seven-time Grammy Award winner and 1950 alumnus.

Bennett, who has been involved in music since fifth grade, thinks being a music major is challenging.

“Music degree is hard,” said Bennett. “Actually, piano playing is the only skill that uses all parts of the brain. So, that just shows you right there how hard it is and how challenging it is to be a music major.”

However, Bennett feels that in spite of the hard work, “the experience is worthwhile in the end.”

Wright said that the department offers free concerts for the campus community allowing the audience to hear music and the performers to perform.

“We strongly encourage students on campus to come out to those,” said Wright. “It is supporting their colleagues on campus. And again, it’s a chance to hear music for free that once outside of the collegiate experience, can oftentimes be kind of expensive. So, I also encourage students to take advantage of the free music while they can.”

Students can witness different performances from the department in performing venues like the Pottle Music Building auditorium, the Recital Hall and the Bass Clef Performance Circle on campus, and the Columbia Theatre for the Performing Arts off campus.