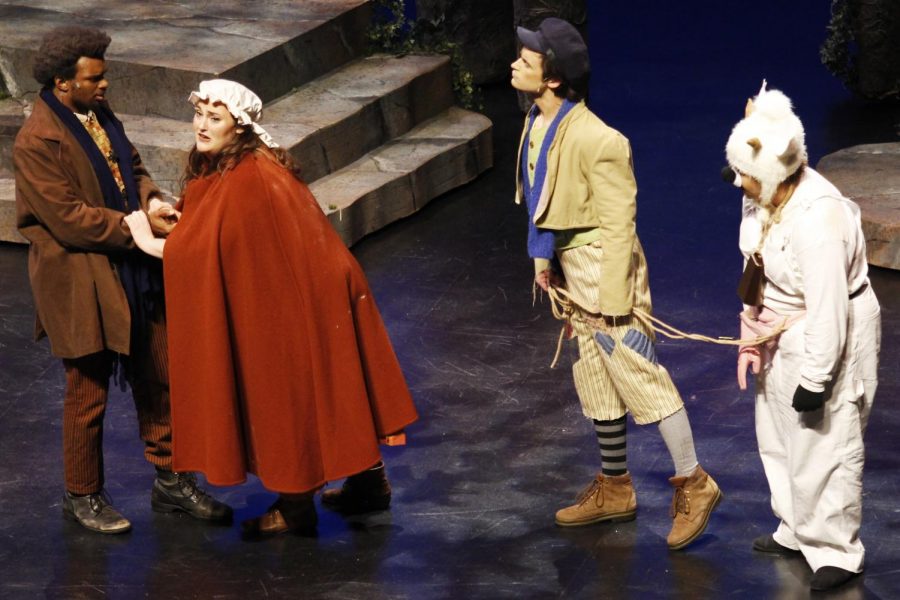 “Into the Woods“ was performed in the Columbia Theatre for the Performing Arts. The act brought together well known characters like Cinderella, Rapunzel and Little Red Riding Hood.

Every play performed on stage requires an ample amount of hard work and preparation.

The play was performed on Sept. 27-28 at 7:30 p.m. and brought together characters like Cinderella, Little Red Riding Hood, Rapunzel, the cunning fox and the witch.

For Wesley Newton, a senior music major, who portrayed Rapunzel’s prince in the play, preparation was a little tough in the beginning.

“At first, it was a little hard because this is such a big production and getting everything done fluent and set pieces in and out,” said Newton. “Most of us already knew the music. So, it was easier on that side.”

Camryn Rodrigue, a sophomore music education major, was the narrator for the play. She discussed the busy schedule to make the play a success.

“We had practices pretty much every day after we had school from about 5:00 to 9:30,” said Rodrigue. “It was very lengthy. We first learned the music and added all the moves afterwards. It really did not hit until this week when I walked in the Columbia and saw the set. When I saw the set, it became a reality.”

Newton shared that he started preparation in the summer.

“Throughout the summer, I learned the two big pieces: the agonies,” said Newton. “I had that memorized before rehearsals started. So, when we started the rehearsals, we were able to focus only on the blocking and dances and all that technical stuff. And then, we started adding on more personal acting techniques. I started working on that myself, started developing that character and being like ‘What is he doing in this scene?’ and ‘Where is he going?’”

Coming from a musical background, Rodrigue had a hard time learning words to speak to the audience.

“I was a speaking role, and everyone else was singing pretty much the whole time, and I had paragraphs and essays to read to people the whole time,” said Rodrigue. “So, I had to practice learning dialogue. As a person who is in the music program, I am not used to learning words. I am used to learning music. So, that was really difficult for me to try to retain all of the speeches without having taken speech classes yet.”

“Into the Woods” is Newton’s seventh performance with the university. He feels the play was different from the rest as it was the biggest he has performed in.

“With music and set, design, costumes, the size of the production, it’s definitely the biggest I’ve been in, the complexity of it,” said Newton.

Rodrigue, who debuted her theatre performance for the university with the play, shared why the play was special to her.

“It’s so important to me because this show in particular is the reason I started performing,” said Rodrigue. “I watched it one day on Netflix, and I fell in love with it, and I said, ‘I wanna do this,’ and here I am eight years later actually putting on this show. So, this show really means a lot to me.”

Rodrigue feels important parts of the performance include the teamwork, trust and faith in the actors.

“A lot of people don’t really see the things that go behind the scenes and all that team building,” said Rodrigue. “All you have to do is trust these people. They’re going to say the lines that come before yours. Yes, you have to have blind faith in them. So, it’s more of a trust building experience than anything else.”