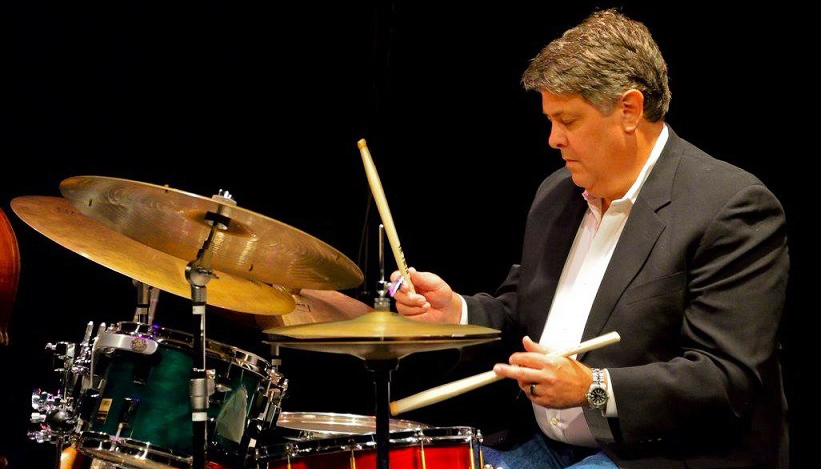 Michael Brothers shares over 40 years of drumming experience, along with his expertise with other percussion instruments, with his students as an instructor of jazz studies, percussion and drumline.

Music has been a constant in the life of Michael Brothers, instructor of jazz studies, percussion and drumline.

Born and raised in San Francisco Bay, California, Brothers vaguely remembers his first experience with live music in the early ‘60s. His parents, who both played instruments, went to see a concert near Lake Tahoe. Brothers shared what his parents told him about that day.

“They had gone to see Henry Mancini at one of the show rooms, and they weren’t able to get a babysitter,” said Brothers. “So, they brought me to the show. They had a table down front in the showroom by the rhythm section, and apparently, I went crazy over the drummer. So, that’s what started it all.”

Around the age of 9 or 10, Brothers started taking private lessons. He stuck with private tutelage until college, all while playing in various musical groups throughout junior high and high school.

Brothers said, “I started out on drum set, and then as I went through high school and particularly in college, that’s when I studied all the percussions: snare drum, timpani, mallets, hand percussion.”

One of Brothers’ early teachers shared with him that musicians should not specialize in one instrument if they want to succeed in the business.

“You can’t just be a drum set player or just a mallet player,” said Brothers. “The odds of success were much higher being broader-based with playing ability.”

In the present day, Brothers enjoys teaching as much as he does performing. After performing for Broadway shows on the road for several years, he has become picky about what gigs he performs in.

Brothers said, “I try to pick and choose a little bit for things that I’m more interested in, and the focus these days, especially after I got off the road from doing Broadway tours, is the jazz trio that I have.”

As an instructor, Brothers noticed the work ethic of the music majors he has taught. He is convinced that music students are “the hardest-working students in any department.”

With the new jazz studies program starting this semester, Brothers is excited that he can help to build up the program. He thinks that it will “be a real strength for the music department and the university.”

Throughout all of his musical endeavors, from traveling to teaching, to performing, to writing albums, Brothers said that he is “really fortunate” to have been a part of the music experience.

“I’ve had an extensive career, not only within jazz, but several years working in Broadway,” said Brothers. “At this stage in my life, to pass that knowledge on to students is important to me.”