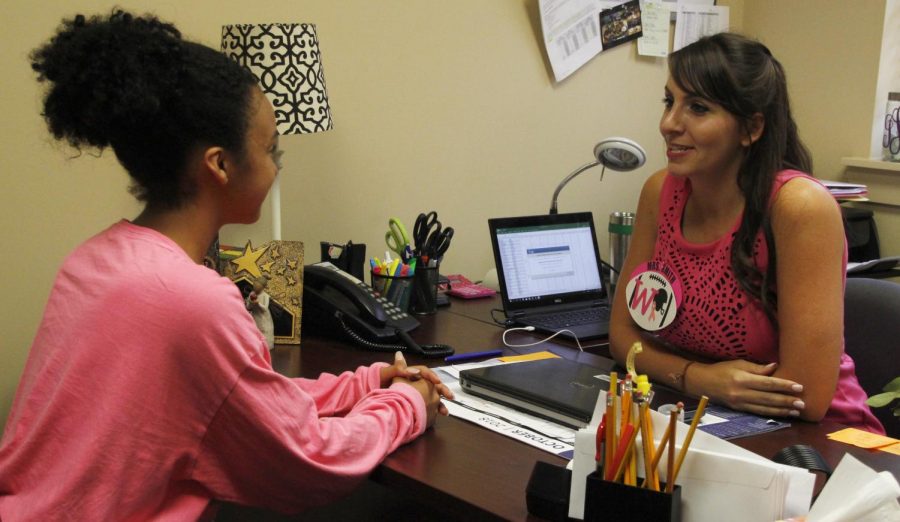 2018 Young Alumnus of the Year Joni Smith speaks with one of the students at Westside Junior High in her role as administrative assistant. Smith was also named the 2017 Louisiana State Teacher of the Year.

2018 Young Alumnus of the Year Joni Smith, administrative assistant at Westside Junior High School, is among those who agree that success is not always handed out on a silver platter.

“I experienced childhood trauma and went into foster care and was adopted in high school,” said Smith. “Being adopted as a teenager is rare as is, and then going into college without a penny, I just had to take a leap of faith and trust God and pursue what I knew I could do.”

Smith has 10 years of teaching experience and was named the 2017 Louisiana State Teacher of the Year.

Smith described the process of being recognized as the young alumnus of the year.

“I was actually titled last year as alumnus of the year, but I was headed to a conference in New Jersey for education, and I already set that up, so I couldn’t cancel,” said Smith. “The best way to describe it is complete honor. Not only do you represent the schools in the state, but you also represent at a higher education, knowing that their student body count is so high, and so, I was recognized as sort of a pea in a pod.”

According to Smith, challenges in her past made her current path towards success surprising.

“I’m not the person you think would be very deserving of such large titles because I was a child that didn’t have much,” said Smith. “I was in the foster care system, adopted and had a lot of statistics stacked up against me.”

Encouragement from a professor prompted Smith to change her career path from nursing to education.

“I had a professor at Southeastern who encouraged me,” said Smith. “Her name’s professor Domiano. She was my nursing professor, and she encouraged me to switch my majors since she saw something special in me.”

Smith shared the various roles required from her as a teacher.

“In education, there’s always challenges,” said Smith. “I may be a teacher, but I’m also a counselor and I’m also a mentor. I’m also a cheerleader, and I play all these roles for the kids. But I’m relentless, and I work with them, and I help them even in their hardest of days. They don’t give up on me, so I don’t give up on them.”

Smith discussed the importance of education, especially with the effort required to keep up with the constant change.

“This is a craft that constantly needs to be polished,” said Smith. “I still seek professional development. I still attend workshops and try to sharpen my craft. I think that’s what’s so great about education as not only are kids changing, but teachers are changing too, and we are learning how to meet the better needs of the students.”