Billington: A life of enjoying design and production 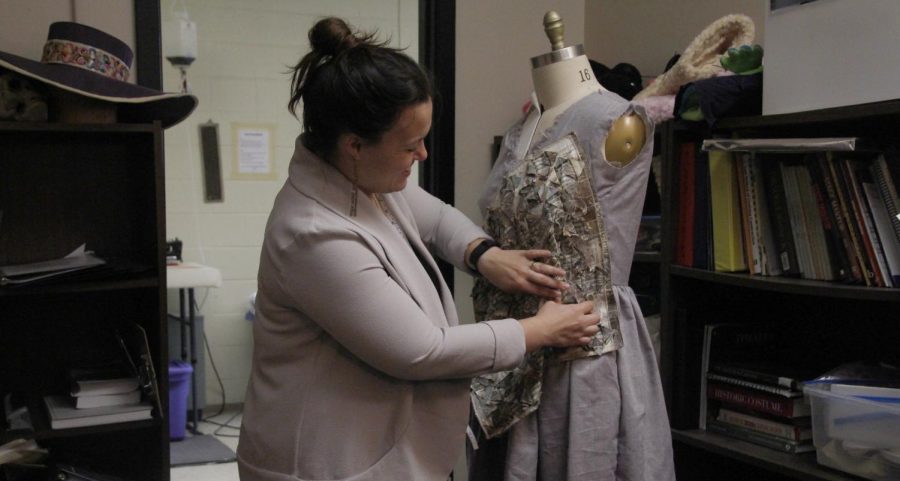 Instructor of Costume and Makeup Design Emily Billington prepares one of her costumes.

Since childhood, Instructor of Costume and Makeup Design Emily Billington has developed her passion for theatre and the performing arts.

“I have been involved with theatre my entire life,” said Billington. “I started out as a performer, very young. My father is a director and costume designer, and so, he put me on stage in ‘Fiddler on the Roof’ when I was 5 or 6. Ever since then, I’ve always been into theatre and performing.”

This semester, Billington took on the responsibility to design costumes and makeup for both “Dracula” and “Into the Woods.” Her experience in the field extended beyond her position at the university.

“This is my second year at Southeastern, and this is my first teaching position, but I have been costume designing in general for about eight years,” said Billington.

Billington completed her bachelor’s degree in theatrical design and production at the University of Wisconsin-Stevens Point and her master’s degree at the University of Alabama. She mentored students at Jefferson Performance Arts Society from 2016-17 and was an assistant designer for her first show “Beauty and the Beast.”

Billington shared how she began studying design in college.

“I actually started going to undergraduate school for vocal performance, but my favorite part of being in the show was always the putting on of the costumes,” said Billington. “So, I dropped my vocal performance major and switched to design my sophomore year. Ever since, I never looked back.”

Throughout her life and professional career, Billington has found numerous sources of inspiration for her work.

“Getting started with my career would probably be my father because he’s the one who pushed me to be involved in theatre,” said Billington. “In terms of a daily basis, I use a lot of visuals to find my inspiration. I will type in Google ‘emotions’ so I can get paintings that speak about emotions, or I will look at paintings in books. Lately, since I’ve been working at Southeastern, the students very much inspire a lot of what I do.”

Billington shared what sort of responsibilities come with her position as costume shop manager and designer after taking actors’ measurements.

“I have to drape a lot of the costumes, and I have to pattern them so that the students can then build them,” said Billington. “Then, I’ll fit them in what’s called a mock up. After the mock up is fitted, I have to do pattern corrections, and once they’re done, I will cut the pattern out onto the fabric, and I will build a few things while I also instruct the students on how to build them.”

Billington offered advice for aspiring art students about the importance of determination.

Billington said, “For those students who are at Southeastern and want to be involved in arts but have constantly been told that they need to do something that’s non-art related and they’re not going to make it in the field, don’t believe those people. If you want to make it in the arts, you can find a way. Get an education and get involved.”