Behind the scenes of Lion spirit 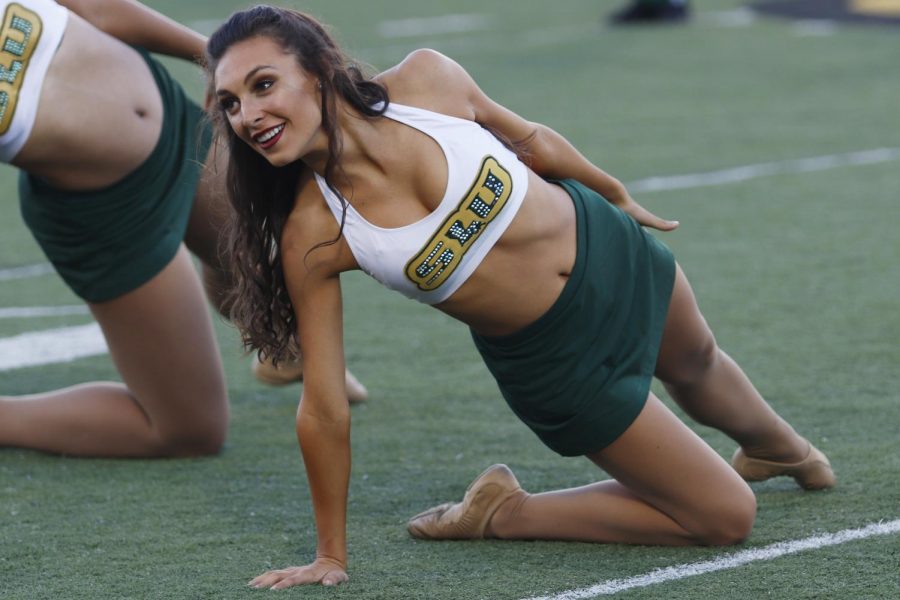 Lionette Olivia Joanos performs a routine for the crowd at Strawberry Stadium. Lionettes and cheerleaders raise Lion spirit for athletic events both on- and off-campus.

As the official spirit squads of the university, the Lionettes and cheerleaders support the athletic teams at on-campus and off-campus events.

The university’s cheerleaders and Lionettes work together to show Lion pride for the athletic programs and fan base. Each year, tryouts are held for both squads where aspiring members must perform routines to make the team.

“Basically, even in high school and middle school, I’ve always wanted to be involved in school,” said Duplessis. “So when I came to college, I wanted to continue that, and for the Lionettes, while it’s a lot of work and a lot of time, I’ve always got something to do.”

Duplessis has been a part of the dance team since her freshman year, and she discussed how the team has affected her college life.

“I’m not from Hammond, so whenever I moved out here, I made friends and that really helped me meet people and make connections,” said Duplessis. “I love cheering on the Lions. It’s one of my favorite things to do now, and I love to dance as I’ve been doing that forever. So, being able to do that in college has been really great.”

While the Lionettes are composed of an all-female team, the cheerleaders promote a coed squad. For a full year, the members commit to weekly practices while preparing for the athletic events and competitions.

Joshua McClain, a senior kinesiology major, shared his view on the practice schedule.

“It’s very consistent, but it’s like consistent chaos,” said McClain. “We have the same practice schedule, same workout schedule, but we have a lot of different promotions we have to do. We have a lot of different spontaneous events that we have to set up for and go into. You really never know what you’re going to get an email for that says, ‘Hey, I need somebody to do this today until it happens.’”

Lionette Olivia Joanos, a freshman nursing major, described how she manages her time on a weekly basis.

“It’s not as hard if you make slots for timing and everything,” said Joanos. “We do practice every other day. We practice Tuesdays and Thursdays and then Fridays, and we have football games on Saturdays. So, if you work your school schedule in between all that, you should be pretty fine. It’s all about time management.”

The biggest performance for both the cheerleaders and Lionettes each year is the national competition located in Orlando, Florida.

McClain explained the competition’s importance for the teams.

“You work all year for this one thing, and you compete against the best teams in the nation for a ring,” said McClain.

McClain discussed the importance of the university’s spirit squads.

McClain said, “Our main goal is to lead the crowd, not just by cheering but just like the energy level and engaging with the crowd so that they’ll engage into the game and know what’s going on and keep them interested.”