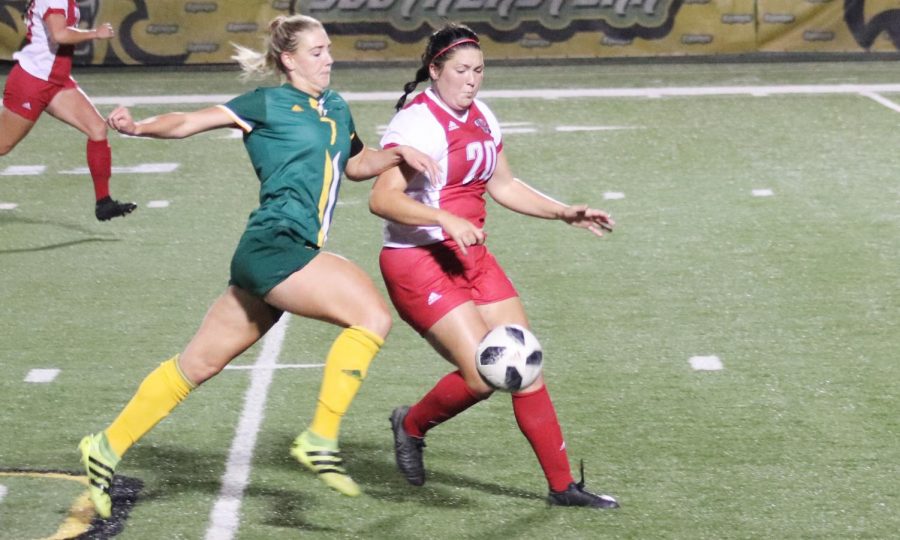 Christina Cutura, a senior forward, is the highest scoring player of the season with a total of seven goals. Cutura scored three goals and her second hat trick of the season in the “Senior Night” game against Nicholls State University.

With seven goals scored this season, Christina Cutura is the highest scoring player on the Lady Lions soccer team.

“Christina has been a true team player this year by taking on a new position in her senior year,” said soccer Head Coach Christopher McBride. “She is constantly working hard. It has a great impact on the team.”

Beginning at age 4, Cutura has dedicated her life to soccer.

“I do not typically have much off time, but after class, I get to shower, eat and then go to work Mondays and Wednesdays,” said Cutura. “After work, I go to study hall and study or go home and do homework. When all of that is done, I’m usually in bed by 10:30, 11 o’clock. Days are long, but when you prioritize things, it is manageable.”

According to Cutura, her family provides her greatest motivation.

“My parents both come from large families like myself, so competitiveness lives within us,” explained Cutura. “I have two sisters and two brothers. We are all around 13 months apart. We always motivated each other and wanted to be the best regardless of what sport we were playing. Soccer just happened to be something I loved to do and continue to love. It’s challenging, physical, mental and aggressive. No other sport beats it.”

Cutura attributes her success as a soccer player to hard work.

“Growing up and now, nothing is given,” noted Cutura. “You get what you work hard for, and I’m a firm believer in that.”

Sacrifice has also played a role in Cutura’s success.

“If it weren’t for my parents sacrificing different things so my siblings and I could play what we love, I wouldn’t be here or the player I am,” expressed Cutura. “Then, also surrounding myself with the right people. My coaches have been so motivating and positive along with friends and family. And lastly, you are the choices you make. I’ve had some amazing leaders to look up to that I’ve learned from and who have guided me to make smart choices. The choices I have made, good and bad, have shaped me to be the player and person I am.”

Cutura views soccer as being a part of something greater than herself.

“Being a part of a team, you are faced with adversity,” said Cutura. “It is competitive, but everyone is rooting for each other, because whether you play one minute of a game or 90 minutes, you matter. You have an impact. You play for God, the person next to you, your coaches, your family and yourself. You are playing for a reason and purpose.”

Through playing soccer, Cutura has made valuable friendships.

“You have 25 best friends, and nothing is better than having a great group of girls all together working towards the same goal and doing something we love,” shared Cutura.

Cutura explained how she does not pay attention to the soccer schedule, often not knowing who they will play until the day before the game.

“I go into games with full confidence in my team and in myself,” said Cutura. “With that being said, I am pretty comfortable on the field or whenever coach decides to move me around. I am more excited than nervous if anything.”

For the future, Cutura hopes to graduate in health education and promotions and pursue a career in that field.

“ Eventually I would like to have a big family and raise them playing sports much like how I was raised,” said Cutura.

McBride has faith in Cutura’s character and ability as a player.

“Christina will always do what’s best for the team,” said McBride. “She puts others before her and wants her teammates to achieve great success. Her drive on and off the field is what makes her a good leader.”