Girard is the voice of the stadium 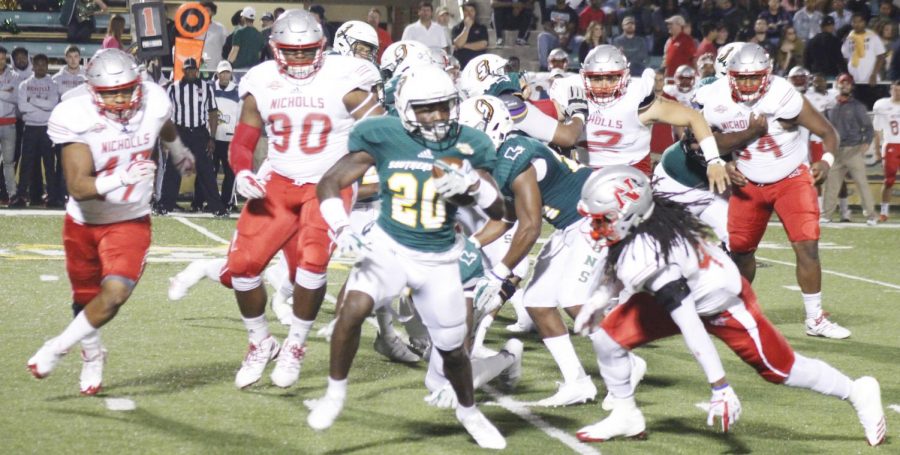 The university hosts home games in the Strawberry Stadium. The Lions’ overall record for the season stands at 3-6. Paul Girard is the PA announcer for the football home games, and he informs audiences about latest updates.

With student-athletes implementing their strategies for the games and cheerleaders entertaining the crowd, announcements updating the crowd about the latest development contribute to the spirit on the field.

Paul Girard, an engineer, is the voice of the stadium and has been working with the university Athletics Department as the public address announcer since 2007.

Girard shared some of his fond memories of visiting the university stadium as a young boy growing up in Hammond.

“I remember when Louisiana Tech and Terry Bradshaw came to Hammond to play the Lions in the late ‘60s,” said Girard. “Who would have guessed we were watching a future NFL Hall of Fame player?”

Although Girard hosted the morning radio show and narrated for his daughter’s dance reviews, his career in announcing began when he volunteered to announce at St. Thomas Aquinas High School.

“I guess you would call it serendipity,” said Girard. “My son was playing football at St. Thomas Aquinas High School in Hammond. The person who was doing the PA announcing for St. Thomas relocated midseason due to a job opportunity. They needed a new PA announcer, and I volunteered to do it. After my son graduated, the school staff asked me to continue as the voice of the Falcons since my daughter was still at St. Thomas.”

The present season for the Lions is Girard’s 12th year working with the university. He takes his job as an announcer more as a hobby as it “provides a release from the everyday pressures associated with a full-time job” as an engineer.

Girard is thankful to be able to do something he is passionate about.

“I’ve always had a love for communications and the English language throughout high school and college,” said Girard. “It is an odd combination to find an engineer hosting a morning radio show on a college radio station. God blessed me with a skill set and then opened doors to allow me to develop it into something I love to do. I am truly blessed and most thankful.”

Girard plans to continue his day job as an engineer before retiring to spend more time with his wife, family and grandchildren.

Girard shared his experience working with his colleagues.

“Over the 12 years of my association with the Southeastern Athletic department, I’ve had the pleasure of working with many fine individuals,” said Girard. “I hesitate to mention specific names as I would surely leave someone out. Jay Artigues and his athletic staff are great folks to work for. “

Girard feels that the university holds a special place in his heart.

“I became a part of the Lion Nation as a young boy attending football games at Strawberry Stadium,” said Girard. “Later in life, after completing my undergraduate degree in electrical engineering at Louisiana Tech, I attended SLU as a graduate student and received my MBA degree. As an alumnus of Southeastern, it is hard to describe the honor and thrill of being able to stand in the press box on Saturdays and give back to my alma mater by serving as the stadium voice of Lion football.”