Lions prepare for the 2019 spring season 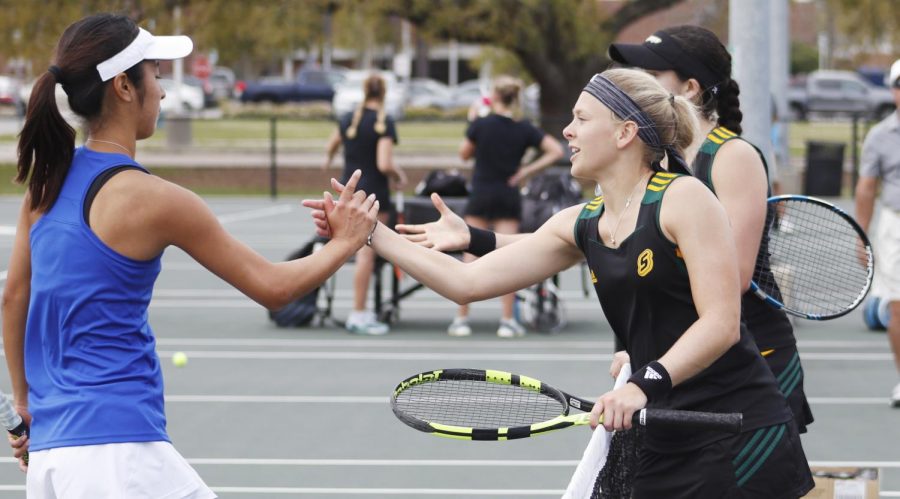 Although the tennis team started their season this September, they will continue competition in 2019 along with several other sport teams. The tennis team's first match of the spring semester will be against Tulane University on Jan. 27.

As fall season sports end, some teams look towards spring competition and a shot at championships.

Baseball will begin its season against Louisiana Tech University on Feb. 15-17. The team follows a 37-22 record last season.

Men’s and women’s basketball both began competing in November and will continue into the spring. The men’s basketball team’s first game of 2019 will be at Stephen F. Austin State University on Jan. 2. The team follows a 22-12 overall record last year.

The women’s basketball team will begin 2019 with a home game against Stephen F. Austin State University. The game is also promoted as the Cane’s Challenge. Women’s basketball Head Coach Ayla Guzzardo discussed her hopes for the season.

“I want to get better every day as a team, as a coach and as a program,” said Guzzardo. “If we do that, then we will have a successful year.”

Guzzardo’s primary concern for the season is injuries.

“It’s something out of my control, but my heart breaks for the player injured, but as a coach, that’s why we make sure everyone is prepared and ready to go at all times,” said Guzzardo.

The Lady Lions follow a 8-21 overall record from last year. Guzzardo looks towards a successful season this year.

“So far this year, we have been successful from successful practices to successful team bonding to successful scrimmages,” said Guzzardo. “We just need to carry over to each game and continue throughout the season.”

The golf team will start its spring season on Feb. 18-19 in Thibodeaux with the Atchafalaya Intercollegiate.

The Lady Lions softball team will begin its spring season on Feb. 7 with a home game against San Jose State University. The team follows a 38-21 overall record from last season.

Softball Head Coach Rick Fremin said, “We have a very young team, but they’re extremely talented, and I hope they continue to grow with their knowledge of the game, stay healthy, and play at an extremely high level.”

Track and field will begin its spring season on Jan. 5 at the Louisiana State University Purple Tiger Friday.

The tennis team closed its fall season in October but will begin again on Jan. 27 against Tulane University. The Lady Lions follow a 6-14 record from last year.

According to Hayes, one of the most difficult parts of the spring season will be the schedule.

“It will be a tough spring, but it’s a talented group,” said Hayes. “They’re young. They’re inexperienced, and sometimes their youth shows in how they play, but they’re talented, and they work hard. If we get off to a good start, we can ride it the whole spring.”

Hayes shared his thoughts on his team’s dynamic.

“They’ve been great,” said Hayes. “College tennis is really the only time you’re part of a team. Everything else, you’re an individual. So, to get them here to try to retrain them as far as team first, individual second, they’ve done a great job, but they’re talented. They have a great sense of humor, and they care for each other. So, it’s a lot of fun.”

The full schedule of games for baseball, men’s and women’s basketball, softball, track and field and tennis can be found on lionsports.net.