The life of Roomie the Lion 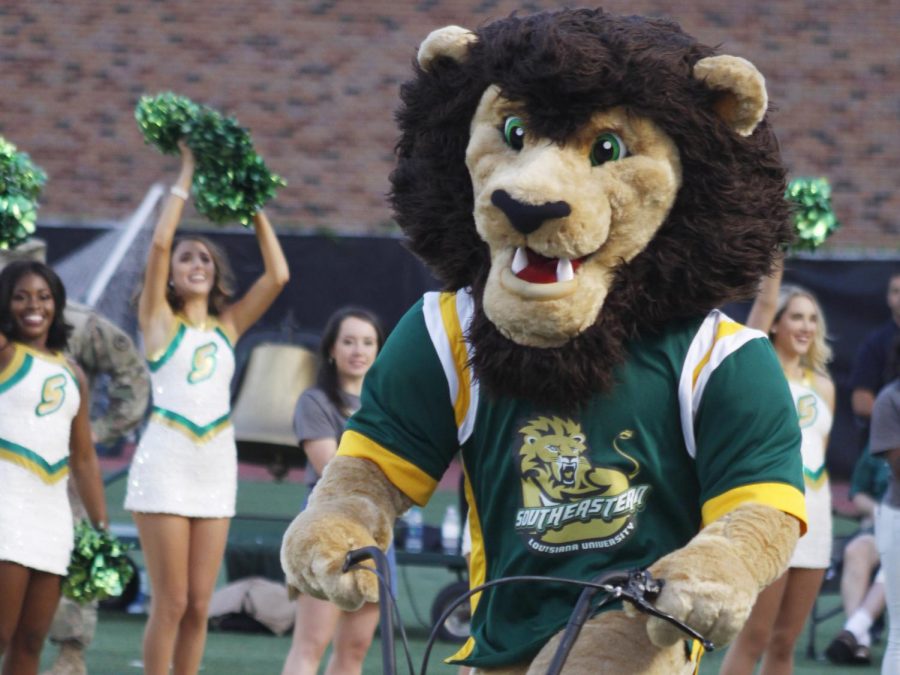 During a football game, Roomie the Lion rides on his bike at Strawberry Stadium.

The university’s mascot prowls the grounds of home games and campus social events.

Roomie the Lion has been the name of the university mascot since 1964 and is named after former biology professor, alumnus and student-athlete Hollis “Roomie” Wilson. Although it has been decades since the university has had a live mascot, the spirit of Roomie resides in the students who portray the lion.

Students who are interested in trying out to become the mascot need to contact Director of Spirit Catherine Messenger, the head cheerleading coach for the university.

“Our past few Roomies have come through showing interest in the spirit programs via email,” said Messenger. “We are in the works of creating a better application. At this point, the best way to apply and get more information on Roomie would be to contact myself.”

Messenger explained that during the selection process, she looks for specific aspects that would make the perfect candidate.

“As far as the selection process goes, the past few years we have had our mascot tryouts with our cheerleading tryouts,” said Messenger. “He or she must be able to get in front of the judges and recreate the Lion walk, stance, and show interaction through movement and no voice.”

As for the student who currently represents Roomie, they believe that their personality motivated them to try out for the role.

“I felt like it would be the best way to help out my university in the only way I knew how,” said the anonymous student. “I’ve always been told I was a bit of a character. So, I decided to put my skills to the test.”

Messenger shared her approval of the current mascot since they have retained their position for years now.

“This has been the fourth year we have had the same student as Roomie,” said Messenger. “They do a great job managing school and the amount of events they must do as the mascot.”

Between school and representing the university, the student explained their time management of duties.

“It is actually fairly simple,” said the student. “Most things I have to do are at night. So, I attend class in the morning finishing up what homework I have between, then completing my events in the afternoon.”

To them, the one thing that they look forward to on game day is “messing around with the little kids that attend the games.”

“They’re the most lovely,” the student said.

Out of the four years in their position, the student shared a memory from one of the games they played as Roomie.

“One time, a parent dressed their baby up as a lion and had me do the whole ‘Circle of Life’ thing with them,” said the student. “That was way too awesome.”

Roomie not only attends sports games, but also makes appearances at events including “Gumbo Ya Ya,” “Strawberry Jam” and “Lion Pride Preview.” Regardless of what campus-wide events students attend, they are almost guaranteed to spot the Lion of the university.