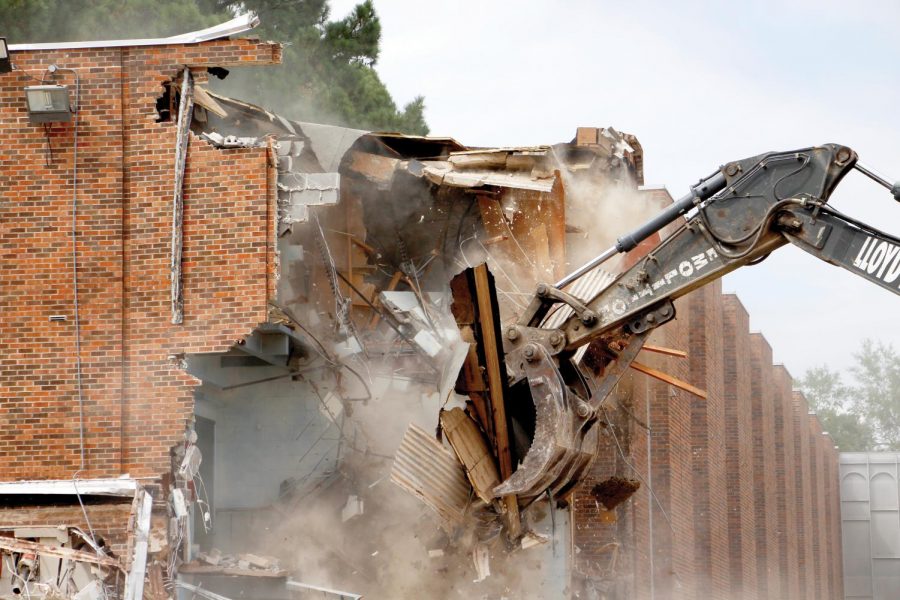 Demolition of Zachary Taylor Hall began in September, 2018, and former residents of the coed residence hall shared their memories of the building.

Sept. 5, 2018 began the demolition of a 56-year-old piece of university history. Zachary Taylor Hall, no longer able to effectively serve its purpose, was torn down last semester after new residence halls, Ascension Hall and Twelve Oaks Hall, were constructed.

“Zachary Taylor Hall served the campus community well for many decades, but its infrastructure systems had begun to deteriorate to the point that repair requirements and costs made it necessary to demolish the structure,” Howe said,.

After living on the third floor of Zachary Taylor for a year, Helen Launey, a resident assistant, found the building to be unique.

“It had the largest lobby area out of all of the residence halls on campus and a massive courtyard in the middle of the building,” shared Launey. “The lobby had a ping pong table and a TV for residents to utilize. The courtyard was my favorite part of the physical building. It was our own private getaway, a retreat from reality, where we were free to embody our inner selves and relax. It was peaceful. I miss it a lot. We even hosted an ‘Aloha ZT Party’ at the end of spring semester for our residents.”

Howe discussed the university’s plans for the space where Zachary Taylor once stood.

“The site is now being used to complete the geothermal fields that will heat and cool the new facilities as well as allow additional parking to be constructed,” said Howe. “We are very pleased with the plans to date and look forward to their completion in the spring.”