Where does the smoke go? 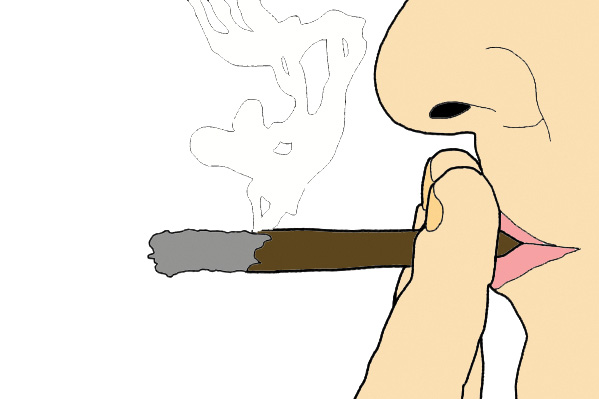 The health risks from exposure to marijuana smoke resemble that of cigarette smoke including risks of cancer and heart and lung disease while THC blood levels were present at low levels for non-smokers in a well-ventilated room with smokers.

Though an individual choice, smoking marijuana can impact more than the user.

When Madison Walters, a junior biological sciences major, stayed in the campus residence halls, she noticed marijuana smoke in her room and the hallways from other residents including her former roommate.

Walters said, “There is a very high amount of marijuana usage on campus by a very large amount of students, and the students that are using marijuana on campus don’t think about the effect that it has on the other students around them.”

Walters discussed how this experience as a non-smoker affected her.

“I’ve had my clothes and belongings start smelling like it after living in the dorms for a semester because so many people in the dorm building I was in smoked in their rooms on a daily basis,” shared Walters. “It had an effect on my job because I ended up having to get drug tested because of the smell being so strong on my clothes. I ended up having to move to the on-campus apartments at the end of the semester because the smell of marijuana got so bad.”

Daryl Julien, president of the Residence Hall Association, witnessed no marijuana being used in the residence halls. He discussed RHA’s procedure if the drug is found in the halls.

“The RAs do checks,” explained Julien. “They walk around certain times of the month. They do checks within the rooms. First, it would be confiscated. If they are caught with it, UPD would probably be called, and further measures would be taken depending on whether it was used or being stored.”

According to Julien, people should consider university policy and other people around them before smoking on campus.

Julien said, “We have a lot of different students from different backgrounds who may be not too familiar with it, or maybe they can’t really be around it, so I don’t really recommend it being used on campus. Outside of campus, that’s your personal business.”

The UPD daily crime log showed 11 possession of marijuana arrests made in Jan. 2019. Last year, in Feb. 2018, seven arrests were made. The 2018 Annual Campus Security Report recorded 16 drug law arrests on campus made in 2017 with half of them occurring in a residence hall. Another four drug law violations were referred for disciplinary action.

“According to the ASR, more drug law violations are reported to occur on campus than on non-campus property or on public property in or adjacent to campus,” stated Patrick Gipson, UPD lieutenant.

Since moving, Walters noticed less exposure to marijuana though some remains in the parking lots around her current residence. She suggested how she would like on-campus marijuana use to be handled.

“For one, the police on campus could actually take the matter seriously when someone complains,” shared Walters. “I’ve had friends who complained about their roommate several times before anyone even came to their room to check it out. It seems as if nothing is ever done consequence-wise on campus when someone is caught.”