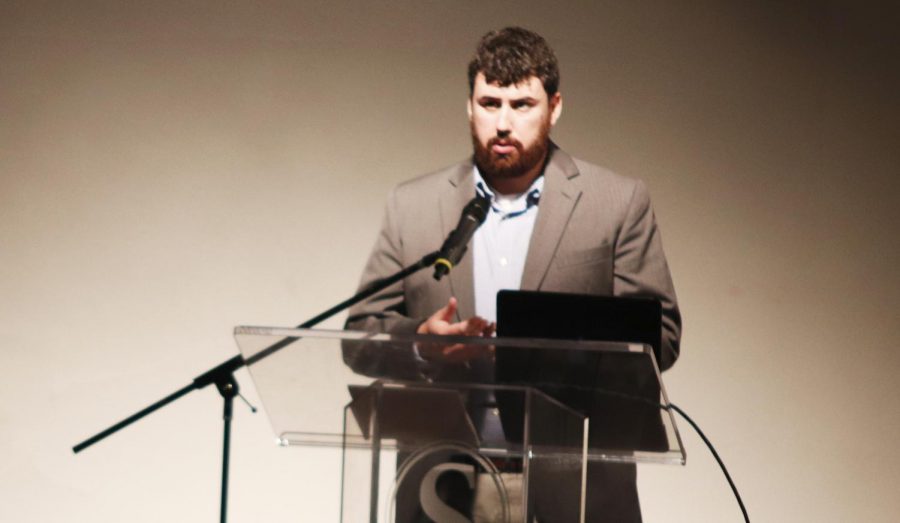 Chad Duffaut, a graduate student, addresses inclusion in sports with "Obstruction: African American Golfers and Southern Resistance in the Twilight of Jim Crow." The lecture was one in a series to honor Black History Month.

The Department of History and Political Science is hosting lectures on African philosophy, racial inequality in golf and Mary Seacole, a Jamaican nurse, as part of the 2019 Spring History and Politics Lecture Series for Black History Month.

Samantha Cavell and Peter Gratton, assistant professors of history and political science, and Chad Duffaut, a graduate student, were chosen to present the lectures this month.

On Feb. 12, Duffaut presented the first one of the series with his lecture titled “Obstruction: African American Golfers and Southern Resistance in the Twilight of Jim Crow.”

“I believe that the issue of racial inequality in golf was, and still is, a vastly overlooked feature of the civil rights movement and the ongoing discussion of inclusion in the sport,” commented Duffaut. “I chose this topic in part of how important these legal battles were to initiating or accelerating the move towards integration in several cities across the South.”

In the lecture, Duffaut noted desegregation is not a thing of the past, and he highlighted legal battles initiated by the African-American community to fight for equal access to public golf courses.

“To this day, it is widely recognized that the sport is still predominately white in spite of the rise of Tiger Woods in the late ’90s and 2000s era,” explained Duffaut. “There have been steps taken by the PGA and other organizations to try and expand inclusion for minorities in the sport, but it is still an ongoing process.”

Gratton presented the second lecture titled “African Philosophy: Past and Future” because he feels that students at western universities do not study the topic.

Gratton said, “Often when we study philosophy, we learn a history that goes back to the Greeks such as Plato and Aristotle and moves us forward through European and North American-born philosophers in the present day, but this leaves out a rich set of philosophical insights that existed on the African continent both before and after the horrors of enslavement and colonialism.”

Gratton stated that African philosophy is relevant to people whether or not they are of African descent.

“Race and racism continue to play crucial roles in our politics whether we like it or not,” stated Gratton. “Emphasizing the cruelties of the past but also the ripe thinking, literature and so on that comes out of African, and African-American history gives us a better sense of who we are.”

The third lecture in the series served as a bridge between Black History Month and Women’s History Month. Cavell’s lecture, titled “Mary Seacole: Breaking all Boundaries in the Victorian Age,” aims to bring to light the story of a Jamaican nurse.

“Apart from her professional success, Mary was also a woman a century ahead of her time in her demand to be recognized as a free, independent woman of color,” shared Cavell. “Her belief in herself and her healing mission overcame all the boundaries of gender and race and allowed her to accomplish her dreams.”

As the only student presenter for Black History Month, Duffaut gained experience planning formal presentations, conducting research and presenting his ideas to a broad audience.

“I’m always thankful for the opportunities to present my research at events such as the lecture series,” explained Duffaut. “For that, I am thankful for Dr. Robison for granting me this opportunity to contribute to a very important discussion.”